I've talked about it before, but I love Overwatch. Most of my friends have stopped playing it, so I don't play it as much as I used to, but I still do for a few hours a week.  Today I'm statting the newest character, Doom Fist, for Light City.

Now it's time to combine settings. Doom Fist makes a great nemesis for Black Panther. He could even tangle or team up with T'challa's ancestor, Prince Mamuwalde (my head cannon). Setting wise, I don't imagine Numbani to be a part of Wakanda, but it's probably near it. I'm sure the Wakandans have an embassy there.

"Only through conflict do we evolve." 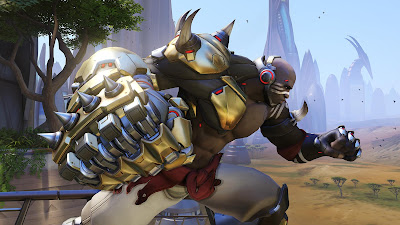 Akanda Ogundimu was born into a highly respected Nigerian family and was the heir to a prosthetic-technology company. He fought in martial arts tournaments and sought to make himself and his company stronger. During the Omnic Crisis, he lost his right arm. His company created a cybernetic prosthetic that made him even stronger, but made him ineligible for competition.

He was recruited into Talon by the second Doom Fist as a mercenary. Eventually his plans proved to be more grandiose that the second Doom First. Akanda killed his leader and took the name for himself. Doom Fist now leads the villainous organization known as Talon and seeks revenge on those that have wronged him.

Once per day Doom Fist can use his fist to launch into the air and then crash into the ground, doing 3d6 damage to all targets in a 7 meter radius unless the target make a successful saving throw (which allows them to take half damage)