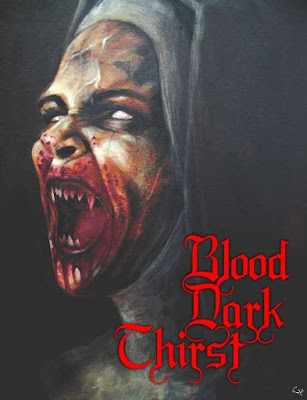 The high priest of Cthulhu, +Venger Satanis, has another fantastic stand alone game that comes a warmer color. I was provided with a review copy.

Blood Dark Thirst is a new rules light game of vampiric awesomeness. System-wise it uses the V6 system that all of Venger's other games use, which is really cool because his other horror releases, particularly The Outer Presence, A Green Jewel They Must Possess, and His Flesh Becomes My Key, can serve as good inspiration for Blood Dark Thirst adventures. I already have some ideas for a certain green jewel.

Character creation is really simple, but makes a lot of sense. You pick some things you're good at and some things you're bad at. If you're good at something you roll 3 dice, if you're bad at something you get 1. For everything else, 2 is the standard. You also pick three flaws which come into play during certain instances. Other than that you flesh out who you are, how you act, and when you were turned.

Actions play out just like they do in Alpha Blue and Venger's other games. The difference here is that you're a vampire which comes with cool powers, immunities, and unfortunately drawbacks. The powers are pretty interesting. All vampires get the classic strong/fast/charming abilities, but then you get unique powers every level. My favourite is the aptly named Subspecies which lets you make little demons like Radu from the movie of the same name. Other vampiric rules you might expect from a vamp game (such as vampiric slaves and blood bonds) are here too.

The pdf ends with a short outline introductory scenario. The party all reside in the same rundown house (which I imagine is a lot like the house in What We Do In the Shadows).  They find a note from a high ranking vampire in the city telling them to get the fuck out. Is it real? Is it a prank? Do they flee? Do they kill the bastard before they can have him killed? That's up to you and your group.

The artwork is appropriate and appealing. I have a thing for blasphemy, so I love the monstrous nun on the cover.

If you can't tell, I really like Blood Dark Thirst and I think you will too. Do you want to play a game that lets you relive your glory days of classic Vampire: The Masquerade but without all of the overdone metaplot? Never played a vampire game, but have always wanted to be Michael or David from The Lost Boys?  This is the game for you.

I might start post some weekly or bi-weekly vampire content for it based on movies, video games, and literature. Blood Dark Thursday has a nice ring to it...