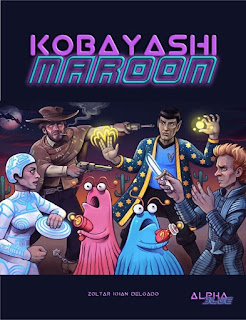 The pdf opens with a forward by Venger discussion about the uneasiness of sexual encounters in rpg's. Honestly, advice I'm never going to follow, because off screen has always been just fine for me and my players, but what's presented is an interesting writing exercise.

What follows is three episodes/adventures and an appendix.

The book ends with npc stats for the mighty Venger Satanis. I wouldn't fuck with him. That's all I'm saying.

I think this one takes the sleaze up a few levels. If you're a fan of Venger's work and Alpha Blue, then this is a must have. If you're offended by someone poking fun at SJW's and political correctness, then this one's not for you. If you want a "did you shit your pants" table and some classic lewd humor in your game, then you should grab this one.

Full disclaimer, I was given a pdf to review.