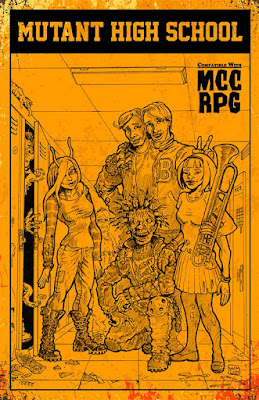 Mutant High School is a limited release for MCC by Goodman Games. Written by Brendan Lesalle, this short zine takes MCC away from Terra A.D. and places it in something a bit more fun. Inspired by The Toxic Avenger, Class of Nuke'Em High, Weird Science, and The Breakfast Club, this zine lets players take the role of high schoolers in the sealed off community of No-Go City. Unlike typical MCC games, there are no pure strain humans. Players play mutants, manimals, and plantients (though they all started off as normal folks).

Characters begin at level 1 and roll a d24 on the arc
hetype chart to build their characters. There are some new optional MCC rules that give the game it's vibe. AI and Artifacts work a bit differently, because characters are familiar with ordinary tech. Characters get a cool mutation, which doesn't necessarily have any overt game effect, it just makes them look dope. They also get to be the Best in Town (BIT). There is one they, based on the character's background, that they can do better than anyone else in town. What this means is based on what the player declares they are the best at.

The game uses Oozing Luck. Is similar, but not exactly like, fleeting luck presented in other DCC variants. This trait is also connected to storyline npc's known as Mute-Guffins and Anti-Mute-Guffins. Being a high school based game, the zine includes rules for taking tests, which is a nice touch, tbh. New equipment and the difficulty of getting new equipment is also discussed.

Finally No-Go City, Bullroar High School, factions, events, and an adventure idea are discussed. There are a few stat blocks here and enough info to lay the foundation for a game.

I think Mutant High is a great variation on a fun system. It's definitely a step away from the new stone age of MCC's Terra AD and I'd love to see more MCC content in this vein. Grab your copy here while you still can.