I paid for a commission of art for this guy a few years ago and never got it. A few days ago I asked my gaming and creative brother, Dave Coppoletti, if he'd illustrate my Spiderson, the Web-Archivist. He did a fantastic job, so I thought I'd repost the stats (with some slightly tweaked lore) along with the new art.

The Spider-Man of Earth 740  goes by the hero moniker, Web-Archivist. J.R. was a small-town librarian, excited when he scored a position at a major metropolitan library. It took him a bit to adjust to city life. Folks seemed colder and less receptive to others then they did where he grew up. This didn't deter him though. He worked hard to establish programs to help the youth and give them a safe place to learn and just be kids. 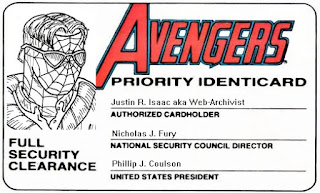 One fateful day, during a summer reading program, his life changed forever. That afternoon the performer, known as The Spider Guy, brought one his newest acquisitions. Unbeknownst to both of them, this spider was actually an escaped genetically engineered spider. It got out of it's cage, bit J.R., then died.

The bite gave him abilities he never had. He was stronger and more agile. These traits weren't superhuman level, but they gave him the ability to keep up with some professional athletes, despite his heavy frame. He could climb walls. In addition, he could naturally shoot webs from his wrists. Finally he gained some sort of spider-sense, that warned him when danger was approaching.

Combining his new abilities with his drive to do better and help his community, he created the costumed persona of Web-Archivist. He is a reserve Avenger and feels that he's primarily vigilante support, but he'll always step up and answer the call when needed.

When not saving the city, he spends his time working at the Metropolitan library and spending time with his kitty, Trixie. 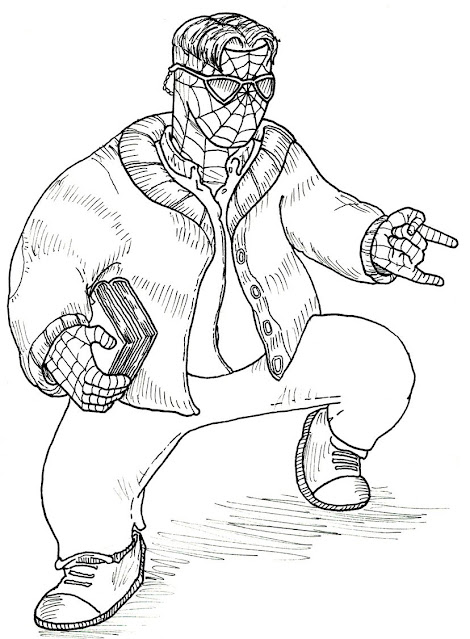 Mutant Powers
Adhesion (+2 to Dex, +1 to Str, +20 Climbing, shoot webbing 70' to swing or incapacitate body part of target [Str check to break] 9/day. May PUSH to shoot beyond daily limit, to double range of a shot, or take no damage from a fall)
Danger Sense (+2 to AC, cannot be target of Seize the Moment, Advantage on Initiative, ranged attacks suffer Disadvantage, cannot be surprised, can detect if mind is being probed, can Push for +6 to AC, +4 to Initiative, and Advantage on all saving throws for 3d4+1 minutes)