Heads Up Raiders, It's Time To Party!

Reagan's Raiders was a three issue series from Solson Publications in 1986. Solson was a black and white comic book publisher crated by Marvel executive Sol Brodsky's son, Gary Brodsky. Sol's son = Solson... cheesy, but not bad if you ask me. The comics were not good. In general, the art and writing was blah at best. Reagan's Raiders falls into the general spot. I picked up the first two issues at a flea market a few years ago, because of how bizarre the books were. I decided to order the third issue so I had a complete run. The series was created by Monroe Arnold and Rich Buckler (the creator of Deathlok). 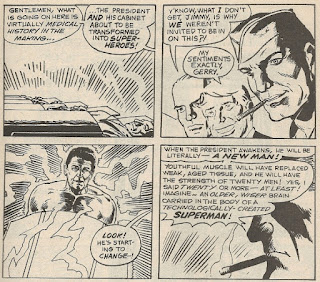 Issue #1 introduced Reagan and definitely-not-Hydra group, the World Terrorist Organization, the Octopus of Terrorism. Their leader Omegus reveals to the reader that he was the cause of Chernobyl and that he will bring America down by taking out three nuclear plants in America. One of his minions, who looks suspiciously like Deathlok says they should be greedy and take down all three at once, but Omegus things its better to attack one and then take out the others if necessary. Taking out all three at once is actually a good scheme, because it would take up valuable resources, but the villain can't win so he has to be dumb. In order to fight the group, Reagan and his cabinet are taken to a secret facility and turned into super soldiers. The process doesn't work on young men, but apparently does with older men, because of hormones or something. Over the course of the issue, Reagan and his Raiders take out the WTO and kill their leader/main operatives. There's some absolutely ridiculous stuff like terrorists with bombs strapped to themselves that don't want to die and Reagan stopping a helicopter blade with his bare hands. There are also a lot of dated references I just don't get. One final oddity of this issue is that it's just a little bit too big to fit in a standard modern comic sleeve without bending.
Issue #2 features a Superman homage cover.  In this issue Reagan's Raiders head to Bolivia to stop a cocaine operation. They fight a couple of men in Destructo Suits. Obviously the succeed and the team suffers no real setbacks Another masked hero is shown in the issue conducting and talking to Reagan about Operation Crackbusters. <insert vomit gif> There isn't as much exposition in this one because Reagan and crew already have their powers.
In issue #3 Reagan's Raiders go to rescue P.O.W.'s in Vietnam. This one is chock full of racism. When discussing the issue on the first page he refers to the problem as "kinda slanty." The Asian soldiers are written as caricatures, referring to the Raiders as "round-eyed devils." It's definitely the worst of the issues overall. Oh did I mentioned that they are going to rescue caricatures of Arnold Schwarzenegger and Sylvester Stallone? Top notch storytelling and references.
As an oddity, I think this book is interesting. I think part of that is that I truly can't tell if it's praising him or satirical. Honestly, I think it is pro-Reagan, but the yes men in his cabinet and some of the stuff makes me think it's supposed to be satire/parody. Also, the artwork isn't great and all the text is capitalized. 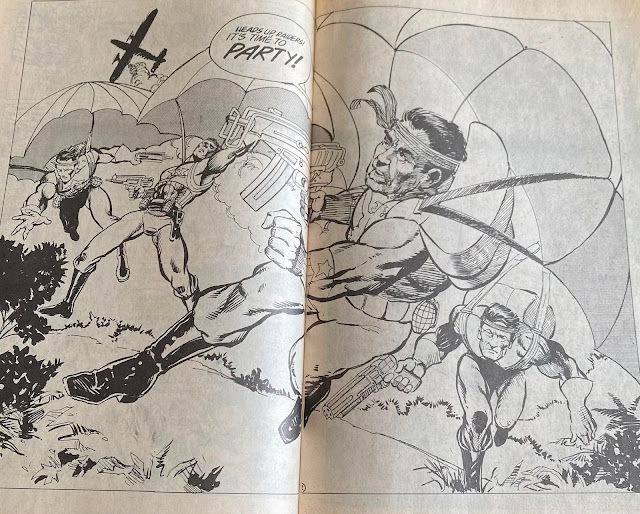 I wanted to include some game stats, so here they are. I personally think Reagan was a menace and did a lot of harm, but these stats are based on the version that appears in the comic. Also, I plan on running with this idea for an alternate dystopian Escape from New York/Days of Future Past version of the Punverse led by a power mad fascist Super Reagan. 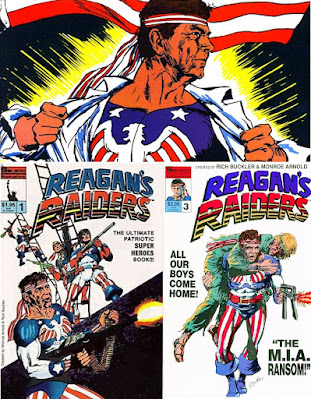 Real Name: Ronald Wilson Reagan
Team Affiliation: US Government, Reagan’s Raiders
Medium Humanoid, Lawful Good
Armor Class: 14 (Dex)
Hit Points: 100
Speed: 30 ft.
Challenge: 5 (2,300 XP)
Str 20 (+5) Dex 18 (+4) Con 20 (+5) Int 12 (+1) Wis 12 (+1) Cha 16 (+3)
Saving Throws: Con +9, Str +9
Skills: Athletics +9, Performance +7, Persuasion +7, Survival +5
Senses: passive Perception 11
Languages: English
Unique Traits
No Soldier Gets Left Behind: The first time an ally within 30 ft fails a Death saving throw, they may reroll it. This ability can't be used again until Reagan takes a short rest.
Powerful Build: Reagan can carry/lift twice the weight of a normal creature his size. Additionally, he can wield heavy weapons with one hand.
Rally: When within 5 ft. of a target that is afraid or stunned, Reagan can use his action to remove the condition. The same effect grants Advantage on fear and charm saves for all those who can hear and understand him until the end of her next turn
Second Wind: On his turn, as a bonus action, Reagan can draw on his stamina reserves to heal 1d10+12 hit points. He can't use this ability again until he takes a short or long rest.
Actions
Mutliattack: Reagan gets two attacks.
Pistol: Ranged Weapon Attack. +8 to hit, range 50/150 ft., one target, Hit: 11 (2d6+4) piercing damage. (15 round clip)
Semiautomatic Rifle: Ranged Weapon Attack. +8 to hit, range 90/270 ft., one target, Hit: 17 (3d8+4) piercing damage. (30 shots before reload)
Unarmed: Melee Weapon Attack. +9 to hit, reach 5 ft, one target, Hit: 7 (1d4+5) bludgeoning damage.
Posted by Pun Isaac at 3:23 PM