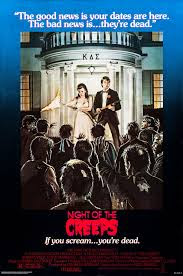 Synopsis: When a couple of fraternity pledges try to pull a prank involving a frozen body they accidentally unleash alien slug creatures that turns can control bodies and animate corpses.

The Good: This movie is an honest and fun attempt at making a B movie. The director knew exactly what he was doing. There are even lines by the character that show this. Tom Atkins is amazing in this flick and has one of the best lines from any zombie movie (which is on the top of the post above).

The Bad: The movie is cheesy... but it's supposed to be.

Final Thoughts: I noticed a few when I first watched it, but the characters' last names are all horror directors. You have Romero, Cronenberg, Cameron, Hooper, Landis, Raimi, and Miner. If you want to watch a classic B movie with zombies, a slasher, and aliens, check this one out.

Alien slugs can possess living or dead bodies. Unless the characters ears, nose, and mouth are covered if a slug successfully hits them, they must make a poison (or infection if using Zombies!) saving throw or be taken over by the slug. Players can remain in control of the characters for 1d6 + Constitution or Charisma modifier rounds. After this they become a zombie under control of the GM. These zombies can only be destroyed by fire or destruction of the head. If the host has been under control for more than a few hours, it will spawn 1d4 alien slugs when killed.