Plot
Suffering from writer's block, the Foo Fighters, move into a mysterious mansion with a gruesome rock'n'roll history. Soon lead singer, Dave Grohl, becomes obsessed with a satanic tune, and the bandmates have to work to stay alive and save him.
Review
Let me start out by saying, if you love the Foo Fighters, you need to watch this. Also if you love rock based horror, you need to watch this. The band play themselves are the gents are funny af. Anyone who's seen their music videos could probably figure that one out.  I seriously laughed my ass off during this one. There's a climactic battle that involves to character repeatedly kicking each other in the nuts. Now that's high art. Grohl is fantastic as the lead. It's great to see him slip into the demon's embrace. It's also to see him falling back on his demonic acting chops (having played a demon twice for Tenacious D projects). Finally the movie has some cheesy, but gnarly effects for horror hounds. I was a big fan of the reoccurring shadowy demons.
In Your Game
While What Shadows Hide seems like the obvious place to go to stat out Dave Grohl for SURVIVE THIS!!, I though Dark Places & Demogorgons had two classes that were more appropriate. Dave fits into both the Metal Head and Performer mold. In a lot of ways performer makes more sense, his association with demons and such in the flick (and previous roles), I felt Metal Head was more appropriate. So I present to you, Dave Grohl statted out as a high level player character. 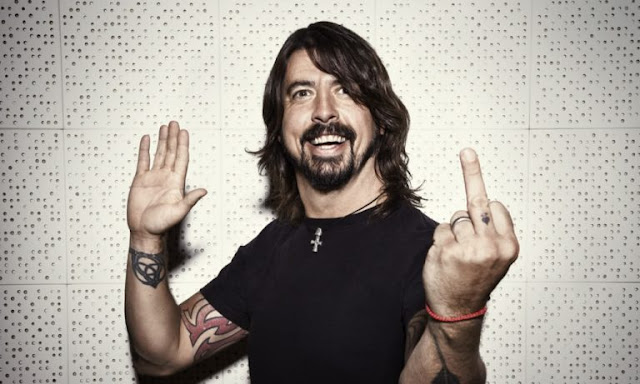 Art & Music 8 (+9)
Cooking 2 (+3)
Fighting: Brawling 2
Intimidation 1 (+5)
Knowledge: Paranormal 4 (+5)
Knowledge: Pop Culture 4 (+5)
Performance 8 (+13)
Persuasion 4 (+7)
Traits:
-2 to all social interactions with authority figures
May use extra SUR point on a failed roll
+1 action per round
Advantage on Performance checks
Metal Powers (10)
Battery
Darkness Descends
Demon Bell
Die By The Sword
Fire In The Hole
Inner Self
Now It's Dark
Number of the Beast
Shake the Foundations
The Unknown Knows
Gear: Anything he wants because he's a f#cking rock star! 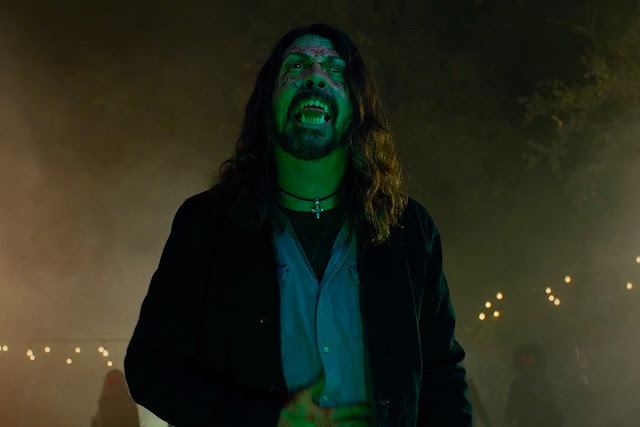 New Movies: 1
Others Horror Movies Watch Since Last Post: -
Challenge Total: 1
Posted by Pun Isaac at 6:00 AM No comments:

The Most Efficient Way To Use the Infinity Stones

Everybody needs a laugh sometimes. Even if you aren't a fan of Breaking Bad or Better Call Saul, this MCU mash-up with drug kingpin Tuco is really damn funny.

He's The Best There Is At What He Does...

I just found out Weapon II existed a few days ago and I believe he needs game stats... because that's how I roll. Also, here's a quote from his appearance in Howard the Duck, "I'm the best there is at what I do, but mostly what I do is gather nuts for winter." 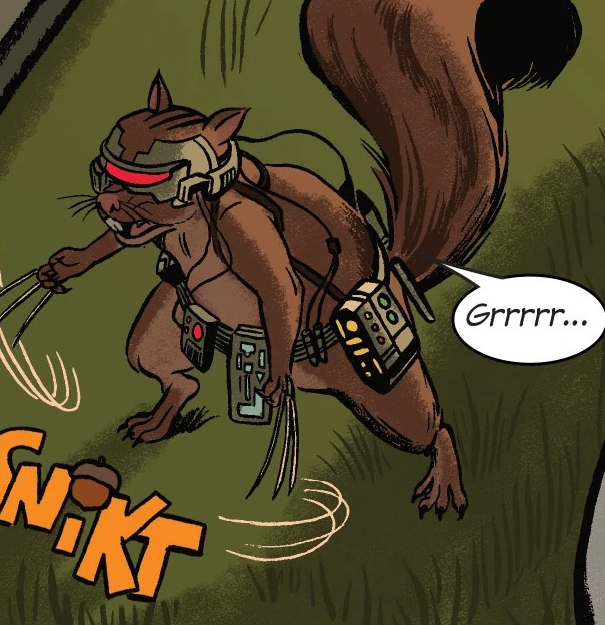 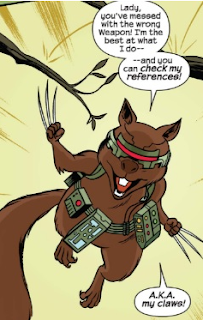 Damage Resistances: Nonmagical bludgeoning
Senses: darkvision 30 ft., passive Perception 12
Languages: English, can speak with animals/beasts
Unique Traits
Adamantium Skeleton: Bludgeoning damage dealt to Weapon II from non-magical sources is reduced by 3. Claw damage done by Weapon II ignores slashing and piercing damage resistance.
Berserker Mode: Weapon II can enter berserker mode. He has advantage on all attacks and all attacks against him have advantage. While in this mode he loses his ability to speak and makes Intelligence saving throws with Disadvantage.
Regeneration: If Weapon II has more 1 or more HP at the beginning of his turn, he heals 10 HP.
Super Senses: Weapon II has advantage on all perception skill checks.
Actions
Mutliattack: Weapon II makes makes two claws and one bite attack.
Claw: Melee Weapon Attack. +5 to hit, reach 5 ft, one target, Hit: 1 piercing damage.
Claw: Melee Weapon Attack. +5 to hit, reach 5 ft, one target, Hit: 6 (1d6+3) slashing or piercing damage.
Background
Weapon II was born an ordinary squirrel. He was also an early experiment of the Weapon Plus program, which used animals as experimental subjects to create new supersoldiers. This is the same version of the program that created Brute Force. Like Wolverine, he has regeneration (which also cause him to age slowly), super senses, and an adamantium skeleton. The process also gave him a human level of intelligence. He teamed up with Squirrel Girl, Howard the Duck, and some cybernetic animals who were being hunted by Shannon Sugarbaker for her hunting tournaments.
Posted by Pun Isaac at 3:53 PM No comments:

When I decided to do the 100 Days Of Halloween  my plan was to post public domain comic pics and gaming material/ideas. I’ve done that some, but with how hectic things are and my current mental state, it’s mostly been just pics.  Not that there’s anything inherently wrong with that, but it’s not what I wanted and it is burning me out.
I am definitely going to still do the movie challenge for Halloween, but I think I am bowing out of 100 Days Of Halloween. You can still see many awesome game reviews for Tim’s take on it over at The Other Side blog. 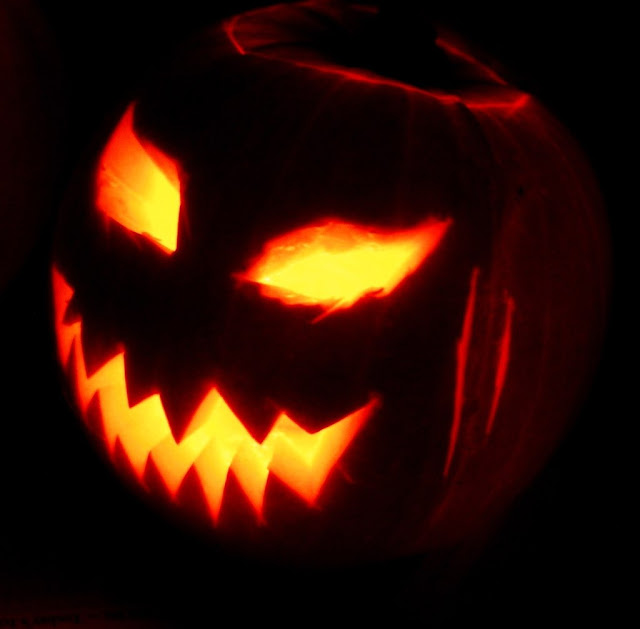 Vought Only Partners With The Best

Another Vought International video, this one is a tie-in with a real world product.

You can order Compound VG-Fuel here, though I doubt it gives you actual powers. This isn’t the first time The Boys has had a tie-in with a real world product. The Deep was trying to sell us Liquid Death canned water before season 3 aired.

I love a classic zombie coming out of the grave image. The cover of Chamber of Chills #24 is one of those and it's *chef's kiss*. 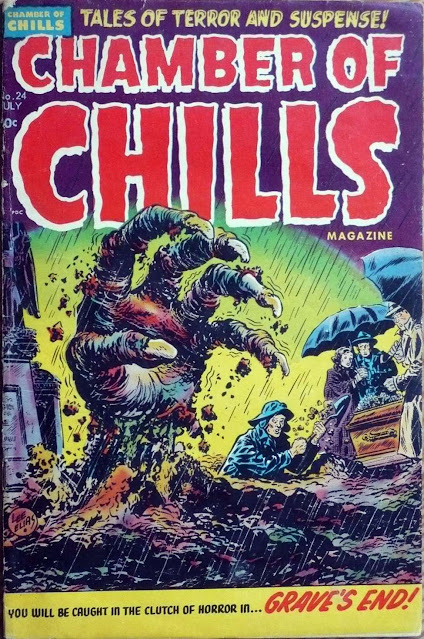 For our second Music Monday track, we have a song about Bakugo's best friend, Kirishima. I love the character's growth throughout the series and the few episodes that he's starred in are some of my favorites. Like a few of Divide's songs, this one definitely tugs at my emotions.

Going to take a break from the MHA tracks for spooky season, so next week's Music Monday will be creepy and/or seasonal.
Posted by Pun Isaac at 6:00 PM No comments: