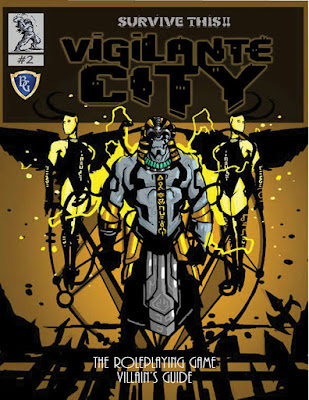 The Villain's Guide for Vigilante City is the GM companion to the Core Rules. Like the core book it is totally illustrated by Runehammer and looks phenomenal.

The book includes a brief description of Victory City (otherwise known as Vigilante City) and the gangs that call it home. Each of the gang has a cool themed, though my favorite (at least by name) is the 502-Trioxin (a great nod to Return of the Living Dead).

This section is followed by 20 or so pages of information that lets you bring the city alive. There are numerous tables that help you truly flesh things out and build adventures.

A ten or so page description of a subsetting for the game, Anthropomorph Island is presented. This is followed by a starter adventure written by James M. Spahn, entitled Coppers & Robots. It's a fun little romp involving mechanical mayhem and serves as a great example of how an adventure should flow.

This is followed by a bit of talk about the MegaHuman explosion in the setting.

The book ends with lots of new characters, good, bad, and otherwise. There is a large number of characters in the rogues gallery. Most of the characters are unique, there there are some great homages to classic villains like Apocalypes.  Vigilante City's one supers team, the Crisis Knights are given stats. This is followed by sample 1st level charactars, stats for generic folk of the city, a bestiary, and templates.

The book ends with community content created by the backers. There's really cool stuff in here. My friend Josh C. has three characters, a snake themed villain, a tribute to Oracle, and a new take on a character from one of our high school games. Tim Knight's Acrobatic Flea gets the VC treatment, though he's known as the Acrobat. He even gets some cool artwork. I have three characters with artwork.  The Wandering Nephil was a character I definitely had to include. This version of the character is a small town mutant that want's to use his abilities to make the world a better place. My second edition is the villainous El Bibliotecario Rojo (the Red Librarian), a luchador and collector of the occult. My final addition to the book is Remedy, a knight nurse who seeks to heal the wounds of the city. Though it's not mentioned in the book, he's going to be a member of Avalanche (a group of "snowflakes" that do what they can to fight greed and make the world a better place). Avalanche will be detailed more at a later time.

This is a fantastic GM book and has all of the crunchy and creative inspiration a person needs to run Vigilante City. Combined with the Core Rules and I really think you have the perfect supers game. I really can't wait to have physical copies in my hands.
Posted by Justin Ryan Isaac at 9:19 PM