R is for Rahovart 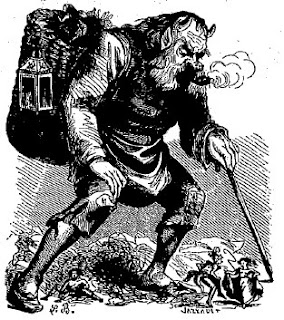 Rahovart is lesser known infernal prince with a giant's stature. He is a curmudgeon who wanders the mortal realms seeking other dour souls. The souls are placed in his large pack to be devoured at a later time. Despite his demeanor, he is a close friend of several members of the infernal heirachy.

Rahovart is immune to all non-magical weapons. Once per combat he can exhale a puff of smoke from his giant pipe. Treat this as if he cast the Confusion spell.

Summoning/Bargaining Ritual Modifiers:  tell him a joke or story that makes him smile (+5)