After sharing the official npc stats of the cast of Goblin Slayer yesterday I decided to sign-up for a free trial of Funimation's streaming service and binge watch the series.

The series is set in a fantasy world filled with adventures. These adventurers are ranked and sanctioned by a guild. They take bounties and get paid. You start at rank 10 (Porcelain) and work your way to 1 (Platinum). The characters are all referred to by their race or class. The only exception I can think of is Goblin Slayer (who the dwarves call Beardcutter and the elves call Orcbolg).

The protagonist of the story is the titular Goblin Slayer. While he's a high ranking adventurer (Rank 3, Silver), he only takes missions and cares about killing goblins. This stems from tragedy in his past. The goblins of the series are similar to typical D&D goblins. They aren't smart, they're about the size of children, and they're seen as pests. However, they are immensely cruel, clever, and they enjoy capturing and raping women (whom they eventually feed on). 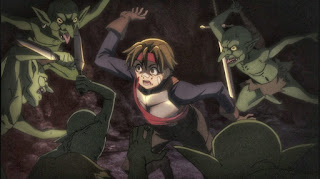 The first episode is brutal and is a litmus test to see if you can handle the rest. The series begins with Porcelain ranked young heroine Priestess reluctantly joining up with three other new heroes to take out a goblin nest and save some local girls. They are warned that it will be too dangerous but ignore the warnings. They're just taking on goblins. It'll be nothing. They are wrong, by the end of the encounter only Priestess reminds mostly intact. The male fighter is slaughtered, the female monk gang-raped and quits the adventuring life, and the female wizard is given a mercy killing by Goblin Slayer. While the actual rape isn't show on screen the beginnings of it and the screams during can be heard and it's chilling.

This actually leads me to my issue with the series. I don't like rape being used to show how bad a villain is. Wrestlers call that cheap heat. It's lazy and anyone can do it. I  can deal with it if I have to, but I think there are better ways to show characters as monstrous. I am particularly bothered about how this is used in the series. The few times goblin captives are on screen, the shots seem to linger too much and their barely clothed forms. I'm all for fanservice and cheesecake in anime, but let's not show it while sexual assault is occurring or a character is held in captivity.

The combat is brutal as Hell. The combat is bloody and well animated. There are some amazing fight scenes and the combat will have any D&D fan salivating at the action. 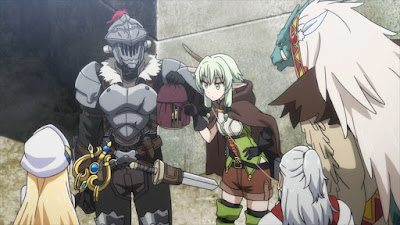 Strangely, the anime isn't all doom and gloom. Like a lot of anime series, there's a great humor streak within the show. Goblin Slayer's non-human party members are all really amusing. I believe my favorite is Lizard Man Priest, who becomes obsessed with cheese and ice cream. I absolutely adore his party and their interactions.

The music and setting are excellent. It's a perfect D&D world. Actually speaking of D&D, I think the setting is actually the Dungeons and Dragons universe. They are multiple mentions of the gods rolling dice and the intros and things show dice other than d6's. While it's never addressed, I think the gods are players and a DM.

Despite my issues, I really enjoyed this series. There's been no announcement on when it will happen, but I was glad to see this after the end credits. 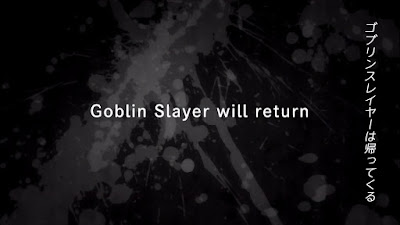 If you can stomach a story with sexual violence and like D&D, this is an anime you should check out. It has great style, characters, humor, action, and an interesting story.
Posted by Justin Ryan Isaac at 2:38 PM