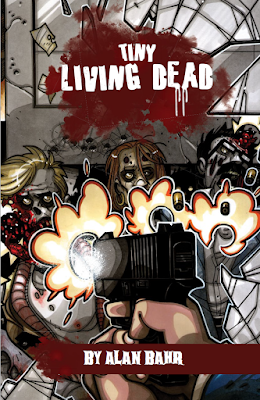 Honestly, if a product is available in print and pdf, I tend to not review it until I have the print copy. However, because of the simplicity and length of Tiny Living Dead, I'm going to go ahead and review it before I get my hard copy.

Tiny Living Dead is a small expansion to the TinyD6 system. It can be used to expand other games that use the system or can be played on it's own, if you want a zombie heavy survival horror game.

The game includes a stripped down version of TinyD6. If you aren't familiar with the system, its a versatile, simple, and fun game. Most things you do in the game will require tests. For a test you take 2d6 and if either of the dice are 5 or 6, you succeed. Advantage gives you another die to roll while Disadvantage takes one away. This is used for complex actions, overcoming obstacles, saves, and combat. In combat there are five actions you can take and there is an optional zone rule that replaces standard range values that most games use. Hit Points and death have simple rules too (and the version in this book are a variant of the standard).

Again, though the game is a micro-expansion to other Tinyd6 there is more than enough here to have many zombie scenarios. There are optional experience and character growth rules. Character creation is very simple. First you select three unique traits that your character has from the 34 presented. You then select from one of the weapon groups you are proficient with (and a weapon you've mastered). Family trade is your next choice. this will give you Advantage on certain things related to what you picked up from your family. Each character starts with 6 Hit Points (the number can be modified by traits). Finally you select a belief that guides your character, such as "I let my fists do the talking."

The game master section is rather short. It describes the six categories of threats (fodder - solo). We're then presented with a page that discusses zombies and how to modify existing enemies and turn them into zombies (Walking Dead), fast zombies (Dawn of the Dead 2004), smart zombies (Return of the Living Dead), and master zombies (powerful zombies that can summon others). For all Tinyd6 we're presented with a few sample zombies: zombies, zombie dogs, and space suit zombies. In addition if you have Tiny Supers, there is a zombie super-power as well as stats for a zombified paragon (with art featuring an undead version of the Gallantverse's champion, Gallant).

I just bought this one last week and haven't got a chance to play it, but I think it could be a lot of fun. While it won't replace SURVIVE THIS!! Zombies! as my favorite zombie game, I think this is a really solid one that I could talk friends into trying with little fuss. If you want a new zombie system or want to include the ravenous dead to your Tinyd6 games, pick this one up. You won't be disappointed.