The second installment of Gunzo! from Bloat Games is a tribute to movies like Aliens and Starship Troopers.

Of course you would! Like True Vigilante, the zine, takes D&D out of the realm of gonzo fantasy and turns it into a sci-fi military game.  However, unlike True Vigilante (and DCC, in general), there is no mention of 0 level funnels. Instead when you make your character you start as a Combat Medic, Engineer, Grunt, Pilot, or Robot. Being a military game, you gain new ranks and titles as you level up. This also affects your pay. 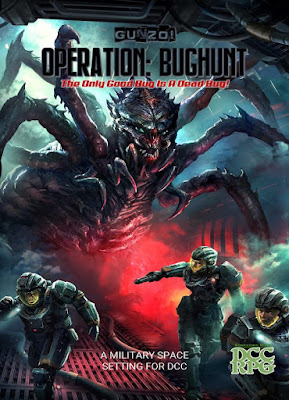 There are several pages of new armor, weapons, and equipment. In addition you get rules and stats for cybernetics. Even if you don't want to use the futuristic classes, sci-fi tech can be a classic addition to a campaign. Why not add some Barrier Peaks to your standard DCC crawl?

While it only gets two pages of coverage, the Pressure & Shell Shock section is outstanding. Essentially because of the high stress your character gains Pressure points. When they get one they roll 4d4+Per modifier and if they roll under they then roll on the Shell Shock Table. You can relieve these by quite downtime, though I'd also go the Starship Troopers film route and say that partying hard relieves them too.

The last section is the most useful part for any DCC game. We're presented with a random bug generator. There is a table for stats, head, thorax & abdomen, and random appendages. I'm not going to do the math, but this gives you a plethora of combinations. This followed by a gallery of Boss Monster Bugs, definitely modeled after Starship Troopers. Finally we have the Phormonex and Master Phormonex (Alien and Alien Queen) and Intergalactic Hunters (Predators).

The art is fantastic there are several propaganda art pieces, which really fits the source material. I'm not sure I will ever run this one as is, because I'm not a big space military person. That being said, this is still an outstanding resource for DCC. You have tons of new equipment, dangerous foes, and monster generation tools.

You can grab you copy of Gunzo! Operation: Bughunt in print here the pdf here.
Posted by Justin Ryan Isaac at 11:19 AM