Dead in the Water Review 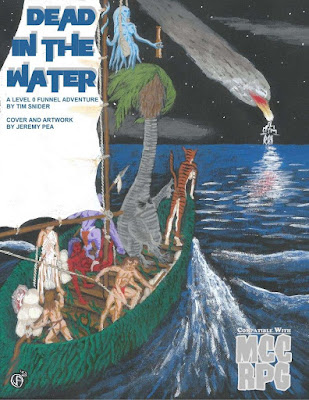 Dead in the Water is a MCC funnel by your friendly neighborhood Tim Snider(man).

This short review is written primarily for judges, so if you you think you might play in this one day, stop reading now.

Like most funnels, the party will control 12-15 0 level characters. For this adventure, they are all nomads or villagers from the fishing outpost of Narleen.

The village is attacked by aquatic un-dead Ancients. The pure strain and mutated tribesman must gather their strength and courage and take a boat to the Island of Fire. There are a few encounters they can face on this journey. Once they reach the village they most contend with more "Drenched" and other hazards, which will eventually lead them to an elevator and the lab is the source of danger. 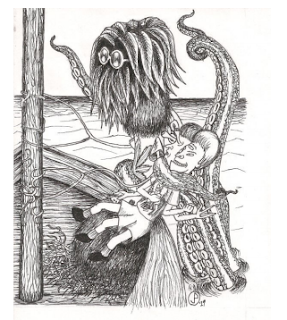 In the lab they are attacked by a giant psychic squid (which they could have encountered heading to the island). Once it is killed they aquatic un-dead drop to the ground, their bodies finally at rest.

I think this is a really solid MCC funnel. Being nautical themed, it's quite unique from other MCC adventures I've seen. The art is also pretty special. There some fun pieces, my favorite being this mutant version of Beavis and Butthead.

They aren't a giant variety of foes (stat wise), but you can describe things differently and make them feel unique. When presenting the area Tim does a great job of describing things the way the Judge could refer to them, while at the same time letting them know what the items really are.

If you are starting a new MCC game, definitely pick this one up. Hell even if you aren't starting a new game, this would be easy to throw into early sessions.