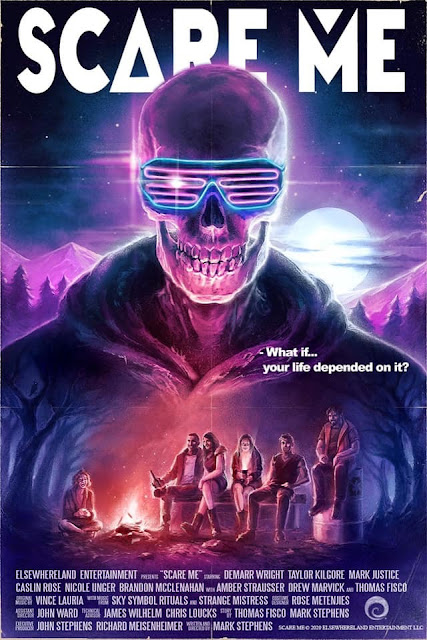 Plot
While on their way to a music festival a group of college kids stop at a campgrounds for the night. While their they engage in a scary story contest. Unfortunately for them, the scares aren’t limited to the tales of fright.

Review
Within the first five minutes of this film you have bondage, bare breasted witches, and eye removal and that does an excellent job of setting expectations for this horror anthology. The primary cast is made up of your standard horror vict... um, protagonists. You have the good guy, the stoner, the asshole, etc. Of the cast of characters, writer/producer Thomas Fisco’s Cooper was a great combination of helpful and menacing. I was also a big fan of Donnie, played by Mark Justice. He played an asshole character, but unlike most characters of that type, saw growth in the film. Finally, I always have a soft spot for stoner/comic relief characters and Brandon McClenahan’s Roger was perfect in that role.

The scary storytelling contest was a fresh way to frame the shorts and gave it a nice grown-up Are You Afraid of the Dark vibe. Of the various shorts, I think Eternal Hunger was one of my favorites. I just really wasn’t expecting the really gross twist in this captive bondage story. Millennial Massacre was fantastic too, but I don’t want to go into that one too much due to spoilers. That being said, every story was entertaining and there were different threads connecting them, which was nice touch.

This last point is neither here nor there, but I was glad to see director Drew Marvick in the film (as well as a poster for his slasher, Pool Party Massacre).

If you’re a horror fan and looking for something new to watch, definitely check Scare Me out. As of the time of this review, it’s available on Amazon Prime.

Like most of my reviews, I like to include some sort of tabletop rpg gaming content. This time, I have more goodies for my free horror game, Slashers & Survivors. Also, these stats don’t necessarily represent things in the film, just drew inspiration from.