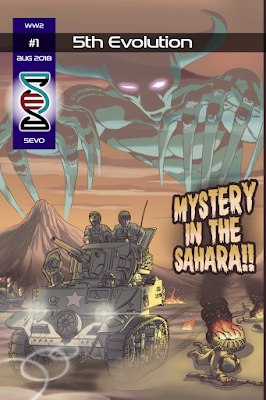 5th Evolution: WWII #1 lets you take your 5e game out of a traditional fantasy setting and into an alternate history where a brave American tank crew encounters powerful ancient magic in WWII.

The book contains 47pages of content. This is an adventure and rules supplement for 5th edition. You need the core books, basic pdf, or the srd to use it.

Like all 5Evo books, this starts with a comic. In the deserts of North Africa a tank crew encounters an ancient Efreeti and his lava scorpion minions (as well as a group of Nazis). Again, like all of the 5Evo books, the artwork is astounding. I'm not really into war comics, but I would read the further tales of this group.

After the comic we're presented with the scenario. The characters are there to stop a group of Afrikacorps who are in the desert to awaken and ancient evil. They do so and that's were the evil genie comes into play. In the adventure they will encounters the Nazis and their commander, an evil genie, giant magma scorpions, an anti tank gun, skeletal guardians, and a mummy.

The party is made of up four different members of the tank crew and the tank itself (which they each share a role in running). It's an interesting idea and I need to run this to see how it plays out. Just reading the rules it seems pretty solid. 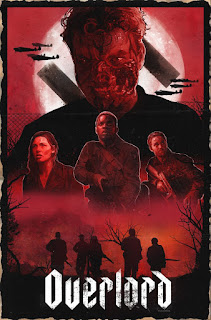 This information is followed by what you need to make your own WWII adventures. There's a one page primer with a timeline and info about the homefront. There are two pages for character creation. You should background and advanced training, which is what really sets you apart from your brothers in arms. Characters are roughly the equivalent of secondary characters (though are a lot more powerful in their tank. This is followed by rules for running a game set during WWII and several pages with firearms rules and lists of equipment. These are really cool, because they are broken down by nationality. There are also a few pages with other vehicles. Finally the book ends with some npc stat blocks (Bedouin Tracker, Raw German Recruit, Heavy Shotgun, and German Officer).

After reading this book again, I think it would be a great way to play something like Overload. There's some great stuff in the Tunnel of Terror book for this (including contagious zombie stats). You could also use this for flashback setting adventures in a Carbide City game. The players could take on the roles of soldiers that dealt with something related to a villain.


Currently only backers of the Kickstarter (like me) have print copies, but you can pick the pdf here. Better yet, you could back their new Kickstarter, 5Evo Whitechapel and get it and the original three (including this one).
Posted by Justin Ryan Isaac at 3:01 PM