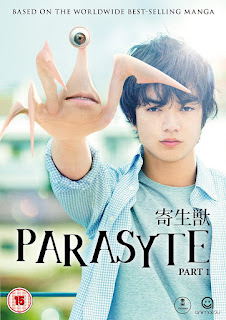 Plot
A group of alien parasites invade the planet and take over human hosts by entering their ears. However, one parasite isn't able to enter the ear Shinichi and incompletely bonds and replaces his hand. This strange symbiosis leads Shinichi and the parasite (taking the name Migi), to learn from each other and discover just how far the alien infiltration of Earth goes.
Review
There have been several awful live-action adaptations of manga and anime. This is not one of them. Parasyte does an excellent job of staying true to its source material while also coming to life. It also does walks that fine line or horror and comedy, without messing either up.The cast all do an excellent job, especially those playing parasytes. They are extremely creepy and portray an inhuman mindset perfectly. The effects are great and I've fell in love with the good parasyte, Migi. He's just frickin' adorable.

The parasytes would make perfect villains in a Vigilante City game.