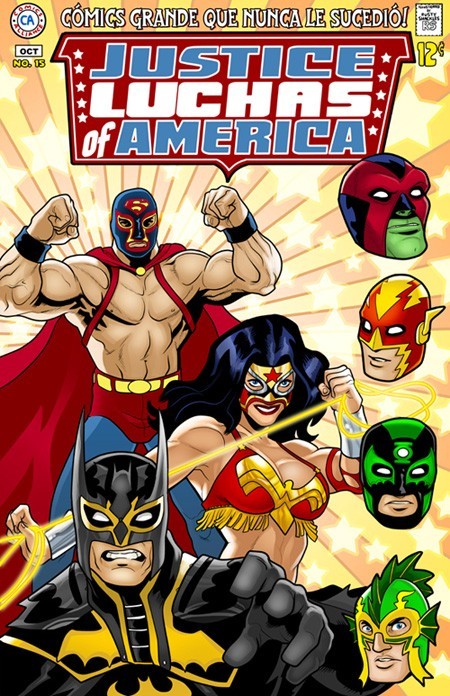 Today I started playing in  Mutants and Masterminds 3E game with my high school gaming group. We were told that while masked vigilantes have existed in the world, actual supers haven't really made many appearances and are considered urban legends, though this is about to change.

I am a fan of Luche Libre wrestling, so I decided I wanted to make a super luchadore. While I've never played it, my autographed copy of Luche Libre heroes is one of my most prized gaming books.

I discussed my character concept with the gm and he approved. My character, El Hijo de Lobo Plata (The Son of the Silver Wolf), is the child of a the leader of Los Misteriosos (The Mysterious Ones), an order of lucha libre vigilantes that can trace their existence back to the fall of the Aztec Empire. The original Lobo Plata specialized in hunting supernatural menaces, and his son was trained to do the same. Shortly before the campaign begins Lobo Plata is killed by an unknown assailant. An attempt is also made on El Hijo de Lobo Plata, though he escapes. His uncle, another member of Los Misteriosos, sends him to America and tells him to keep a low profile.

Stronger Than He Looks (Enhanced Strength 4 - Limited to Lifting,)

Trained By My Father (Damage 4 - Strength Based, Penetrating 4)

The Mask, The Man (Feature 2 - Cannot be unmasked unwillingly, while wearing mask cannot be identified as Salvatore)

Complications
Enemy: El Hijo de Lobo Plata is in the US because his father was murdered. While no one is sure who the culprit was, it is believed that the younger Silver Wolf was is also a target.

Luchadore Code: As a Tecnico, El Hijo de Lobo Plata must always fight with honor. Also, when first encountering a female opponent he will give her a chance to surrender.

Motivation - Doing Good: The son of a famous luche libre hero, El Hijo de Lobo Plata has taken up the mask and fights for the people because he believes it's the right thing to do.