The following bio was taken from Marvel's character database. 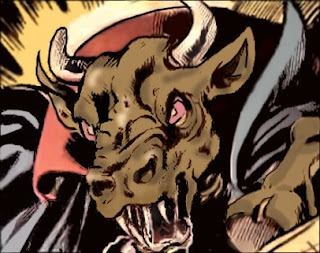 Bessie was born three hundred years ago and was owned by a local Switzerland farmer named Hans. One night Dracula searched through the local Swiss town, but could find noone to feast upon, so he drank Bessies blood. The next morning Hans discovered Bessies lifeless body and buried her. Three nights after she was buried she rose from her grave and swore vengeance on Dracula and his kind. Three hundred years later Bessie found herself in Cleveland, Ohio where she encountered Howard the Duck who she confused with Dracula and attacked him. Despite Bessies powers Howard managed to gain the upper hand during the battle when Bessie became stuck in a local store. Desperately Howard found a wooden stake and a mallet and drove the stake through Bessie's heart, killing her.

I believe that Bessie later re-appeared in one of the Deadpool comics.

Complications
Cow: Bessie the Hellcow, despite being a powerful vampire, is still a cow.
Power Loss: While not destroyed, Bessie loses all of his powers (with the exception of Protection) when exposed to direct sunlight. 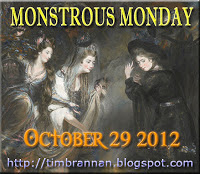 Posted by Justin Ryan Isaac at 2:12 AM