The Mask of Satan

I spent Christmas drinking and watching horror flicks on Amazon Prime Instant Video. It sounds like a happy holiday right? One of the films I watched was the 1960 Italian film  Black Sunday, also known as The Mask of Satan. I first heard about the movie here. I thoroughly enjoyed the film. The movie deals with a witch's curse and vampires. If you haven't watched it, I recommend it.

I think there are some great ideas for Ravenloft or Lamentations of the Flame Princess that can be taken from the movie. At the beginning of the film the film's antagonist is forced to wear the mask of Satan. I'm taking some liberties of course but below are the "stats" for one of these masks. Also, in a none Earth based game, just replace Satan with  the Adversary or the name of the demon prince of your choosing. 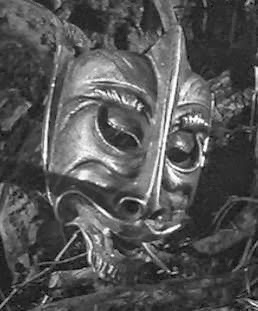 Mask of Satan
25sp*
Description: This grotesque looking mask is used as a punishment for witches and others that would consort with Satan. The metal mask has spikes on the inside. As the mask is hammered onto the to damned one's face, the spikes penetrate the flesh. This process causes 1d4+2 damage per round of hammering. Once the mask is "donned" the bearer is marked as a servant of Satan.

*if using a system other than LotFP, the price becomes 25 gp

I have a few magical variations of the mask that are my own devising.

Blessed Mask
This variation of the mask is created from cold iron taken from church bells and blessed in holy water by a priest. Any spawn of Satan wearing this mask is rendered vulnerable to mundane weapons. In addition if they are buried within site of a cross they can not return to life. The tricky part is getting the Hellspawn to wear it. 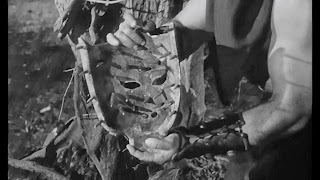 In the past this particular mask was hammered on to a falsely accused witch. This accursed action imbued the mask with sentient malevolence. The inquisitor/witch finder that owns this mask will act as though they've been affected by a Suggestion spell. They will begin to believe that there is a grand witch conspiracy and they will be distrustful of those around them (even close allies). The evil essence that inhabits the mask will seek to subtly influence the owner into believing that an innocent is actually a witch. The mask continues to influence the owner until either the owner relinquishes possession of the mask (unlikely) or the owner uses the mask (at which point the masks reveals the error of their deeds to the horror of the witch finder).