Light City #3 - The Amazon is now available! It's another free Light City class by +Jonathan Linneman. The Amazon only has a few abilities, but they really capture the archetype perfectly. This might be my favourite of the classes so far.

The release is great timing for me because I just watched Wonder Woman this weekend and loved it. I didn't think it was perfect, but it was damn near close. The final confrontation felt off. Still the movie rocked! But the movie rocked and this class is an excellent way to create your own Themysciran.

As always I wanted to stat something up using the new class. I decided to go with my favourite of DC's Amazons, Grace Choi of the Outsiders. 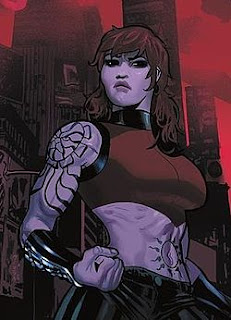 Grace Choi has lived a hard life. Early on she was abducted by a prostitution ring that exploited runaways. When her powers kicked in at puberty she was able to escape. She lived independently for years, eventually becoming a bouncer at a metahuman bar. This changed when she was recruited into the third iteration of the Outsiders by her friend Roy Harper (Arsenal). It was during this time that she acknowledged her Bana Amazon to hero community and fought alongside Wonder Woman (the pair describe themselves as cousins).

Grace is semi-retired with her girlfriend, Thunder (daughter of Black Lightning). She has not received a gift of the ancients, but surely the gods are aware of the Amazon heroine and will bestow something upon her soon.
Posted by Justin Ryan Isaac at 6:39 PM