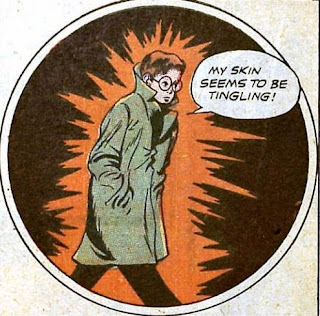 While I don't think every character in a game needs to have stats, I thought it would be fun to stat and introduce some supporting characters to Light City. Invisible Boy is a public domain character and you can read more about him here. I've added to and altered his story to make him a part of Light City. The character's real name and mention of a breed of lizard inspired the Spider-Man reference in his back story.

Dan Curtis is a middle school student at the elite Light Academy. There, his his herpetologist father, Dr. Conner Curtis, is a science teacher. Dan has always been obsessed with chameleons and their ability to change color. His obsession became his reality when a freak windstorm caused an electrical surge in his father's lab. The combination of reptiles, electricity, and chemicals gave Dan the power of invisibility. Dan uses his new found powers to prank his classmates. He also has a strong sense of right and wrong and has secretly helped the Light City PD on a few cases. He is enamored with costumed heroes and wants to fight crime along side them soon, though he knows his father will not approve.

As an action on his turn Dan can become invisible (as the 2nd magic-user spell Invisibility). He can do this any number of times per day.