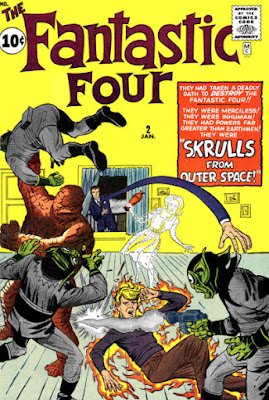 There's no real reason to plan a secret invasion now that Earth is wasteland, but that doesn't mean that we're skrull-free true believer.

The skrulls (technically the Deviant Skrulls) are an extraterrestrial race of shapeshifters. They are a fierce warrior race who carved an interstellar empire out of the Andromeda Galaxy. There warlike nature brought them into conflict with other aliens empires, such as the Kree and the Shi'ar, as well as the heroes of Earth.

Few skrulls frequent Earth since the apocalypse, but there are rumors of skrull communities in the wastelands.

Skrulls can alter their forms into anything they imagine, organic or inorganic. However even in these new forms they gain no new powers and retain their humanoid internal physiology. Due to their malleable physiology the skrulls can grow wings to fly and stretch their limbs when needed.