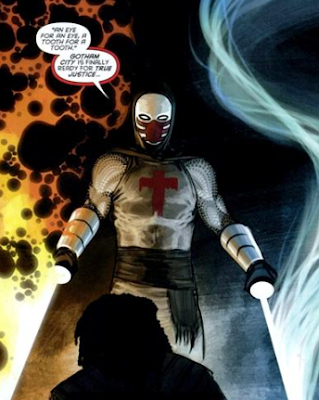 Below you'll find a few more of the items I'm statting out for my Gotham game. They were written for Light City, but definitely work just fine in a regular Swords & Wizardry Light game.

Suit of Sorrow -  This cursed armor grants it’s wearer a –3 [+3] bonus to AC. In addition while worn, it increases their Strength and Dexterity by two. However, it also makes them more violent. When confronted with violence and aggression, the wearer must make a successful saving throw or reciprocate the violence and aggression.
Sword of Salvation - This mystical sword can conjure the truth of things in the wielder and victim. The victim must make a successful saving throw or be unable to act for a round as they overwhelmed with guilt and start seeking redemption in their minds. This sword is capable of striking through an opponent but not actually doing physical damage if the wielder wishes it.

Sword of Sin - This mystical  sword can conjure thoughts of all unatoned sins in those struck by it. Like its sister sword, it is capable of striking through an opponent but not actually doing physical damage if the wielder wishes it.
Posted by Justin Ryan Isaac at 9:18 AM