I decided to stat this ridiculous character because it's Super Bowl Sunday. 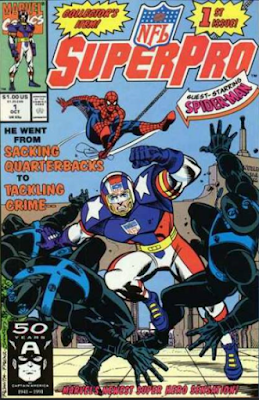 Aspiring football player, Phil Grayfield, career ended when he saved a child and suffered a career ending knee injury. Loving sports, he becomes a sports reporter. One day he interviews a sports fan who also happens to be a scientist and inventor. Thieves interrupt the interview and steal a van load of NFL memorabilia. They tie Grayfield up and set the house on fire. He manages to free himself though he's doused in experimental chemicals. He then dons a new almost indestructible football uniform created by the scientist and pursues the criminals. He decided to dedicate his life to fighting crime and dubbed himself SuperPro.

SuperPro Armor  - This power armor gives its wearer a -4 [+4] armor. In addition, the helmet has a built in communicator and gives infrared vision.
Posted by Justin Ryan Isaac at 9:58 AM