M is for the Midnight Gun 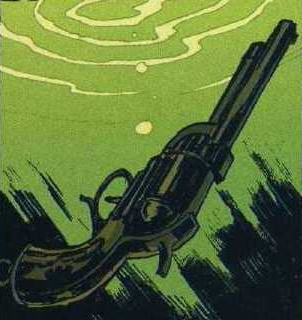 A young gunfighter heard a legend that stated if one brought a gift to a particular graveyard on a full moon during late October at the stroke of high midnight they could get a demon to grant their wish. He kidnapped a baby and took it to the graveyard to exchange. The Devil arrived, but the man had to exchange his own soul, not the baby to get his wish. He agreed and the Devil made him the "fastest gun in the West" by giving him the Midnight Gun. The gun only made him the fastest at night and his soul would be forfeit on death. The young man returned to town and challenged the bounty hunter, Gunhawk to a duel. He drew and was much faster than Gunhawk. Unfortunately he never practiced and despite being able to shoot fast, he still couldn't aim... His soul immediately when to Hell and even Satan was shocked at how fast the young man had died.

Anyone wielding The Midnight Gun at night automatically wins initiative. The gun never needs to be reloaded and is considered magical for the purpose of overcoming damage immunity.
Posted by Justin Ryan Isaac at 11:24 AM