Well Origins 2018 has come and gone and I had a great time.

Wednesday
I skipped because I had a work conference that day.

I ran into Eric from Bloat Games early Thursday morning. 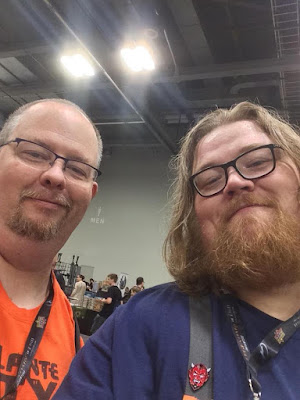 My first con purchase was some moonshine d6's. I thought they'd be perfect for Portsmaw! They are from Black Oak Workshop. I got the second set because I spent more than $10 at the booth (and had the con coupon). 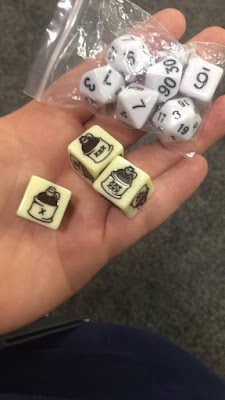 My first game of the con was DCC Lankhmar with Michael Curtis. I was super stoked for this. Though I don't know too much about Lankhmar, I love DCC and Michael Curtis is one of my favorite adventure writers. I had a lot of fun and will have playtest credits when the adventure is released. I also met Jason Hobbs of Hobbs and Friends of the OSR. 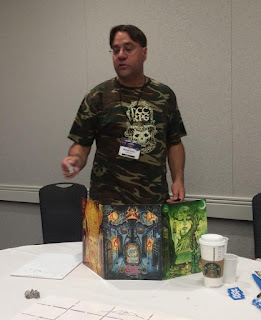 I spent most of my money at the  Goodman Games booth. This is what i picked up. I got the Grimtooth adventures because Trapsylvania is supposed to come to Kickstarter soon. Primate Tales is one that I've been looking forward to. Expect a review soon. 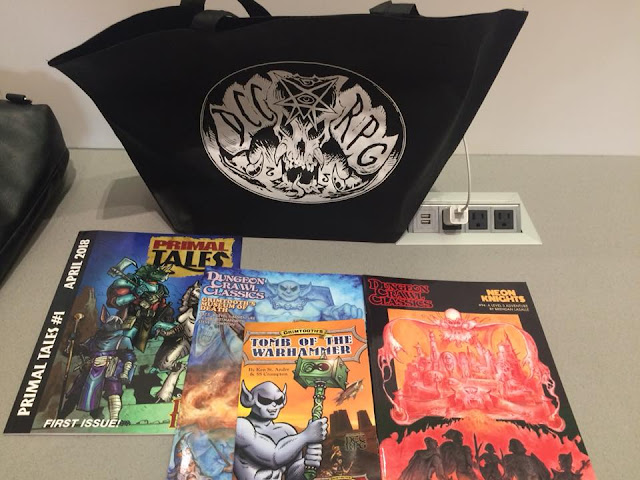 I was able to get my copy signed by the chief editor and writers. Brett Brooks even did a sketch in it for me. 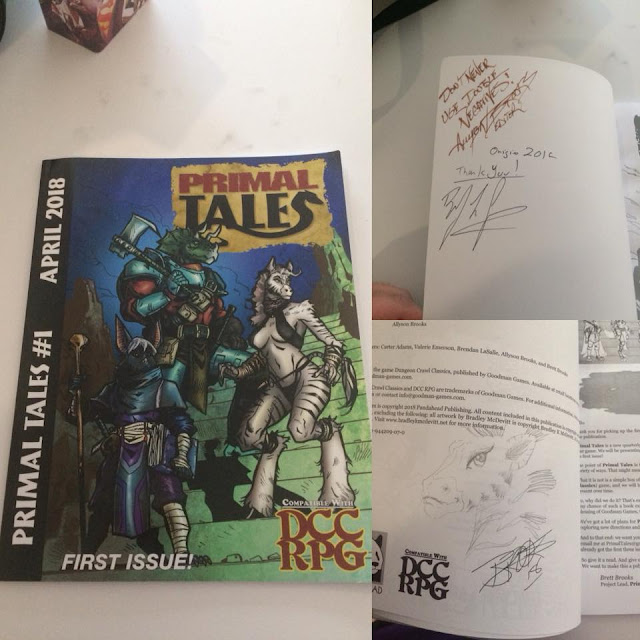 I ran into Egg Embry. I didn't get a pic because my phone was dead, but it was cool to meet him in person. I skipped my learn to play Shadowrun session because it was later than I realized.

Friday
My feet really hurt Friday and I couldn't get parking within a mile so I decided to rest. I missed learning to play Through the Breach and the Kobold Midnight Massacre. I was disappointed, but I need to recuperate.

Goodman Games had their Free RPG Day swag and were giving it out free. I have a DCC quickstart, but this one has a new adventure. 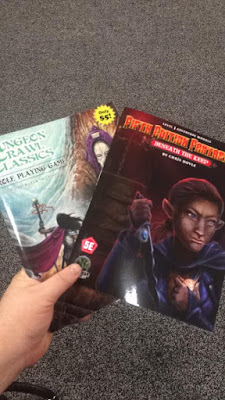 I am no master painter, but I'm happy with the two minis I did at the "paint and take." The first is supposed to be a goliath and the second is a pulpy masked hero. 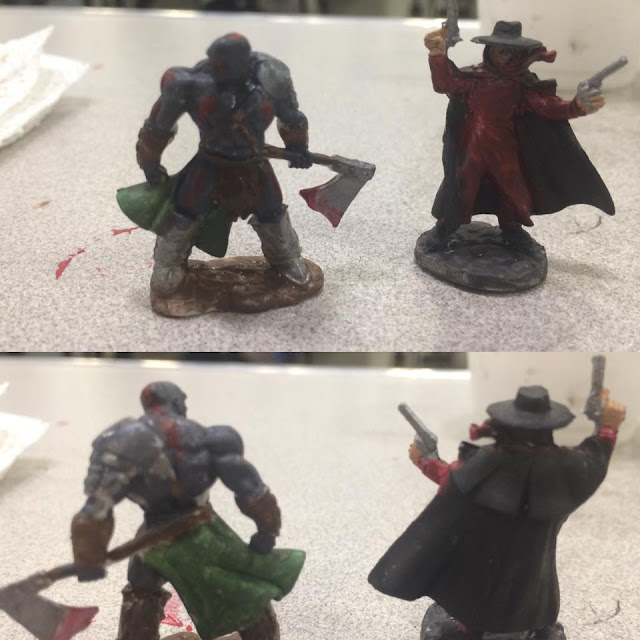 The other players of my 9 am Survive This!! - Zombies session were a no show but I did have a great conversation with Eric Bloat. I also snagged the new Dark Places & Demogorgons book. Expect a review soon. 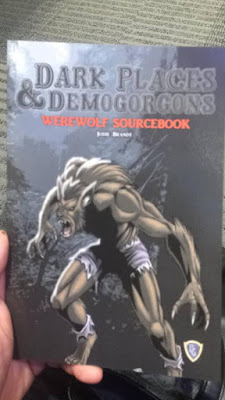 I picked up these cards from Crit Games. While they aren't a must have, they are going to be super helpful in my next 5e game. 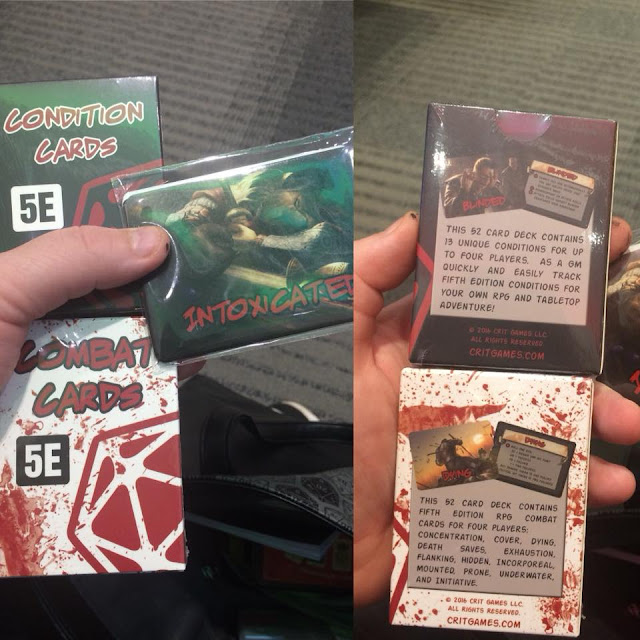 I ran into my old character, Kyle. 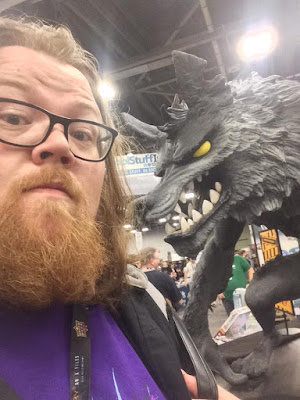 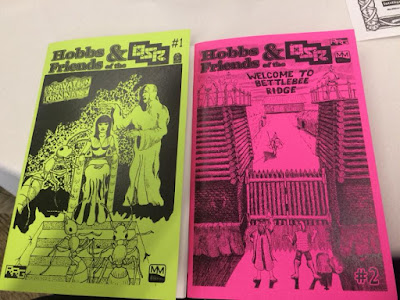 I ended Saturday night with Dark Places & Demogorgons. One the way to the session I ran into my gaming fam from back home. It was great. I didn't have much time to talk, but I got hugs and that means a lot to me.  So, the session got real dark, real fast. One player straight up murdered a bully with a crowbar. However, we kind of rewound it and ultimately it was a blast. My skateboarder shanked a chupacabra twice while riding his board. It was totally tubular! 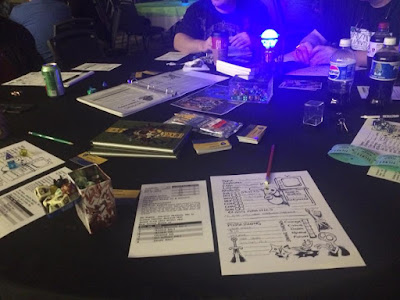 Sunday I just hit the exhibit hall with my son. He played in the Battletech pods. He couldn't make his mech move, but I could hear him laughing the whole time so it was worth it. He got a bunch of dice, because he wants to be a dice collector (his words). I want to give a shoutout to  Black Oak Workshop. Grayson go three oversized dice from them and the owner asked if he had a dice bag. When Grayson said no, he just gave him one for free. It was a super kind gesture and I really appreciate it. 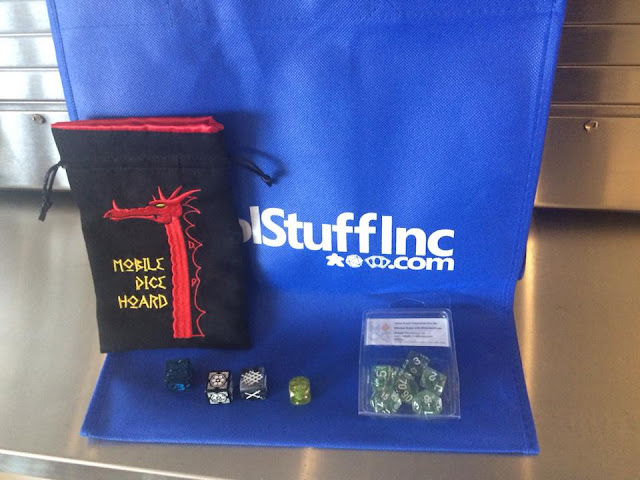