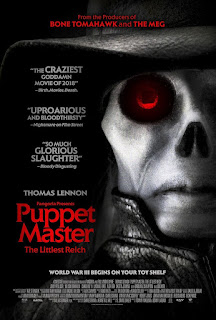 Synopsis: Recently divorced comic shop worker (and writer), Edgar moves back in with his parents to regroup. While there he reconnects with a friend's younger sister and starts a relationship. Looking to make some money, Edgar decides to auction his deceased brother's puppet. The pair and his best friend/boss head to a convention centered around grisly murders that happened 30 years ago. Soon the puppets come to live and a blood bath ensues.

The Good: I really like the cast. Thomas Lennon is a great lead and Jenny Pellicer does a nice job as his love interest. Nelson Franklin is entertaining as Markowitz and Skeeta Jenkins cracked me up as Cuddly Bear. It was also nice to see scream queen, Barbara Crampton, in the film. Udo Kier was creepy as Toulon, though he definitely sounded German and not French. As far as the horror aspects of this film go, it's pretty brutal and times and pulls no punches. There are two deaths in particular that stand out (one involving a pregnant woman and the other a kid). I also like that even though this is a horror movie there were comic book elements. Lennon's character quickly figures out what's going on because he creates fantastic stories for a living.

The Bad: This movie is mean. Because the Nazi nature of the villains, a lot of the murders are against minorities. This is explained in the plot, but could still definitely bother folks. Also, there's an aspect of the reboot that bothers me. The puppets aren't unique. For example there are several different Blade puppets. I think this was a mistake, because what made the original pictures so good was that each puppet had it's own personality, even if they didn't speak. There's also a character that I liked that gets killed off needlessly that bugged me.

Final Thoughts: This was a fun (but nasty) film. I don't know that I like it as much as I like the originals, but it was an interesting reboot. The movie's ending is totally open and the words "To Be Continued" appear on the screen. I'm definitely looking forward to the next one.

In Your Game: Instead of statting individual puppets, I figured I'd give base stats and then a chart you can roll on to customize it.

All puppets get a +4 to all die rolls to avoid detection.