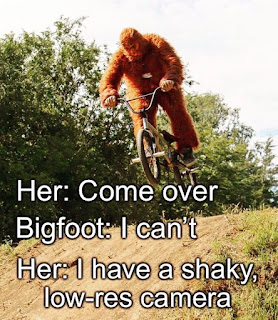 While there are several variations of Bigfoot in the Cryptid Manual, I assure you, this isn't one of them. You'll notice the format for this monster is a bit different, but that's because I want to follow the new format.

"I don't care if he was covered in fur and couldn't really talk. That dude had some rad skills!"
-Travis Craft, J'town extreme athlete

Special: Can run or ride at X4 Move.

The BMX Bigfoot is a oddity among the various types of Bigfoot. He's smaller than most and is more likely to interact with humans (though he tends to limit this to other bike riders and extreme athletes). No one is sure where he got them, but his trademarks are his bike (which he's adept at taking care of) and his amazingly large sneakers.
Posted by Justin Ryan Isaac at 10:36 AM