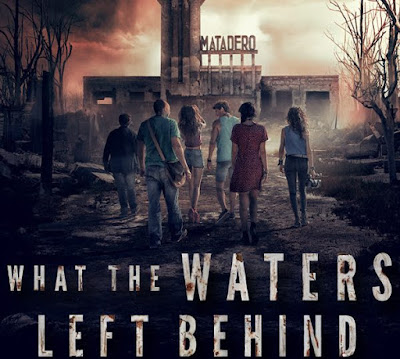 Synopsis: Epicuen was a tourist village in Argentina. It flooded and was abandoned. Twenty five years later the waters receded. A group of filmakers travel with a young woman born in the town to create a documentary. While there, they find that they aren't alone.

The Good: Epicuen is a real town and as a setting is fascination. There are some gorgeous haunting shots. Also, this is a crazy cannibal family flick and those are fun. They killers look pretty cool and cult-like with their bone adorned weapons and skull masks.

The Bad: The pace of this film is awful. In particular there's a character that we know will encounter the crazies, the shot goes to another scene, and when focus returns to that character she's running in fear. The first 45 minutes of the film is set up to build a connection with the characters and it doesn't. The tones during these scenes are just weird too, almost music video-like. There's a subplot about a guy who's daughter went missing that had potential, but doesn't really do much. There is also sexual assault scene that goes on for way too long. The twist ending isn't a good one and I saw it coming pretty early in the film. 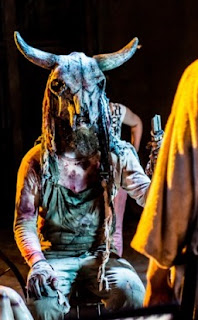 Final Thoughts: I was really excited when I saw this movie had been added to Amazon Prime. I was also really disappointed when I watched it. It has a lot of potential, but just squanders it.

In Your Game: A village like Epicuen would fit perfectly into just about any setting. For that reason I'm giving you stats that can be used for SURVIVE THIS!!.

If you decide to use these stats for White Box, these killers are AC 7[12] and worth 60 XP.
Posted by Justin Ryan Isaac at 3:24 PM