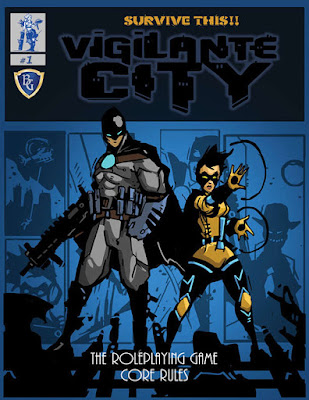 Today is the day non-backers can finally get a true taste of Vigilante City. The pdfs for the Core Rules and Villain's Guide are available. The core pdf is a massive 294 pages. Of those pages, 194 are devoted to the classes!  The art and layout have been done by Runehammer  and are truly amazing. The game's style and rules perfectly emmulate 80's and 90's action vigilante cartoons like Batman: The Animated Series, TMNT, Spider-Man, and X-Men.

The game, like other SURVIVE THIS!! titles, is a built on old school D&D rules and new school innovations and sensibilities. The game includes the classic six attributes, along with a seventh, SURVIVAL. This attribute can be spent to re-roll a failed attempt on a dice roll one time. Characters also start with more hit dice that a typical OSR character. These tweaks make it easier to survive, which is nice considering the lethality of old school gaming. Characters have six saving throws that they will need to roll under or tie during game play. They are courage, critical, death, magic, mental, and poison. There are a few interesting charts associated with them. My favorite is the Death saving throws' Out of Action chart. If you're reduced below 1 HP ,  you are taken out of action, unconscious, and roll on a d6 to see if there are other effects. Note, you only actually die on a 6. Again, this makes the game less lethal than its OSR brethren. The game uses the classic Law and Chaos alignment system.

One of the new optional rules for Vigilante City is the Vigilante Points system. Characters start with a value of 0 and this number can be raised or lower depending on their actions. Their vigilante score can provide some great penalties or bonuses, depending on the characters' reputations. Another great option during character creation is the Vigilante Origin tables. Sure you can come up with your own, but you can also roll randomly (which will give you some interesting bonuses). There's also a starting money chart, which provides additional character traits (such as skill bonuses or additional starting languages).

As mentioned earlier a majority of the book is taken up by class information. The classes are divided into two groups, human and megahuman. The classes allow you to play gritty street-level non-powered or take it to the next level and play low level supers (though trust me they can be quite powerful at high levels). While the human classes are rather balanced, that's kind of thrown at the window a bit with the megahumans. This emulates the genre well though. Hawkeye and Black Widow are on the same power level, but while they can hold their own for  awhile, aren't at the same level as Iron Man.

Here are the 15 human classes with a brief description/overview:


There are 8 megahuman classes. They are: 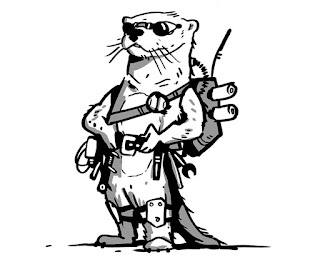 The classes are followed by the skills section. Some classes allow characters to just select from all the skills while others (among the megahuman) classes have skill packages that determine skills and give other other abilities. This is nice because it lets the classes differentiate themselves, so you can have a party of anthropomorph turtles, but each can have it's own niche to fill.

The game has a very simple XP & Leveling system that it shares with other SURVIVE THIS!! games. It only takes up two pages, but covers both combat and rp heavy games.

Given that gadgets and equipment are so important to supers and vigilantes, there is quite a bit of info in this section of the book. There are pages of armor, weapons, special arrows, utility belt info, and other equipment. While the chapter can't cover everything, if covers enough to give you detailed guidelines for vigilante resources.

There are some great rules for vehicle and chase rules. These allow you to handle most situations and seems versatile, yet simple.

The book ends with the Playing the Game section. These 20 or so pages fill in the blanks on how to actually put all of the previously mentioned goodness to use. If you play OSR games, most of this will seem familiar, but there's some new stuff here that separates Vigilante City from other games. There are several critical hit/failure charts and a random name chart.

If you can't tell from my large collection of Vigilante City posts, I LOVE this game. The art and layout is phenomenal. Runehammer really knocked it out of the park. His unique style gives this that great BTAS Bruce Tim feel. There isn't a bad piece of art in the book.

The game itself is old school and (overall) rules light enough for my taste, but provides so much variation. Another great t hing about this game that I didn't really touch on is it's modular nature. Don't want superpowers in your game, don't include megahumans. While everything works together, you don't have to include it all in your game to have a fun campaign. If you're going to play in a Vigilante City game, you should definitely pick this up. It has everything you need. If you're going to run a Vigilante City game, you should also pick up the Villians guide, which I'll review later this week.

If you're into supers games, this is definitely one to check out. Buy it. You won't regret it.

Gear up! Your city needs you! 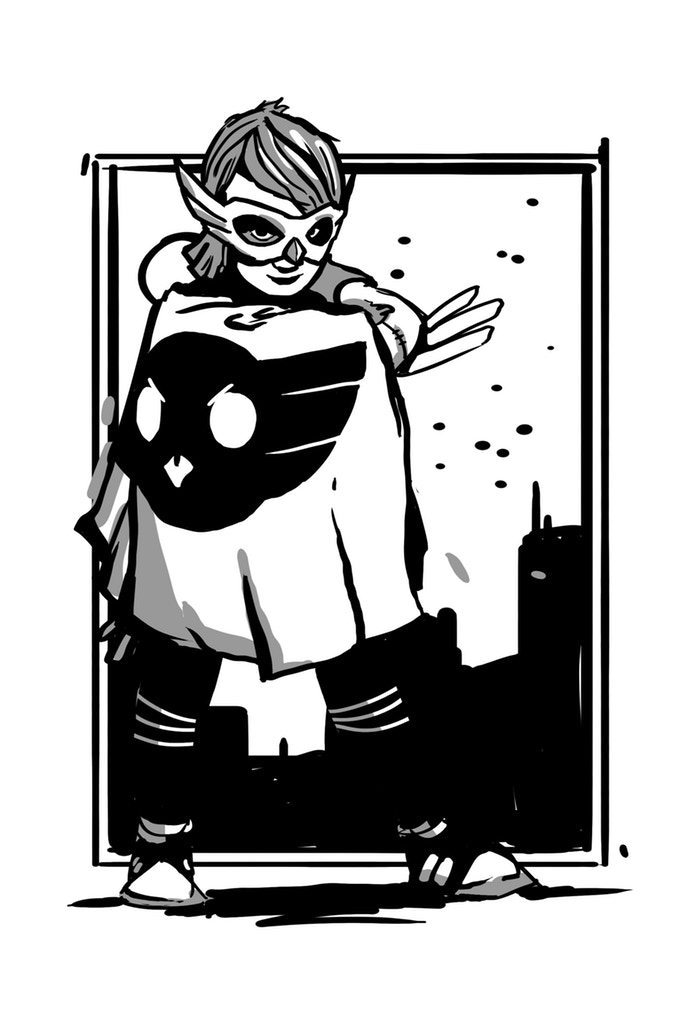