The Daughters of Darkness: The Mara Witch for Basic Era Games Review 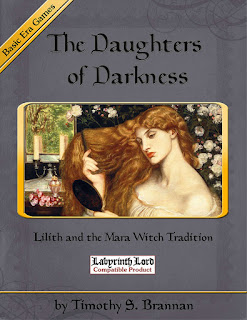 The Daughters of Darkness: Lilith and the Mara Witch Tradition is the latest witch tome from my friend Tim over at The Other Side Blog. If you have any of Tim's other witch books, this one will look familiar. That being said there is a lot of great new material that makes this a must have for witch lovers.

Physically the book comes in close to 80 pages. The interior is black and white and the art is a mix of modern rpg and classic public domain. This really fits well with the theme of the book.

The book starts with a short introduction that discusses what exactly a witch is and how it compares to clerics and wizards in game terms. This section is very similar to other witch releases Tim has, but it only takes up a few pages, so no biggie if you've got the others.

The second part of the book details the witch class for Basic  versions of D&D. The overall class itself is the same as the version presented in The Witch: A Sourcebook for Basic Edition Fantasy Games. The major difference is this book includes the titular Mara Witch tradition. The Mara are associated with both life and death, which gives them a dark reputation, even for "good" members of the tradition.

A vast majority of the book is taken up by spells and rituals for the tradition (and other witches). These are very flavorful and while there is a bit of crossover with previous witch books, there's plenty of new content here.

The next session is possibly my favorite. There are 39 monsters that can face your party or be allies. My favorite among them are the various Lilim (daughters of Lillith) and different types of vampires (also often considered to be Lilith's children). These monsters stats are followed by three very powerful evil witches. The first is Mary Worth aka Bloody Mary. Tim has done a great job of taking a classic legend and making it game-able. The second unique witch is Darlessa, the Queen of Vampires. If you want a nightmarish vampire witch, she's just what you've been waiting for. Finally stats are included for Lilith, herself.

If you have any interest in witches, Lilith, demons, or vampires and OSR gaming, then I think this is a must have. I own all of Tim's witch books and I think this might be my favorite.
Posted by Justin Ryan Isaac at 1:34 PM