Written by Dan Steeby, Bronx Beasts is a fantastic take on Dungeon Crawl Classics. I picked up a copy of volume 1 at Gen Con and I was very happy with the purchase. "Bronx Beasts is a wild 1980's action featuring rules for generating and playing bizarre mutant animal characters..." These rules let you get your TMNT fix using DCC rules.

A majority of the 43 page zine is focused on Character Creation. This is different that typical DCC rules and has seven steps. 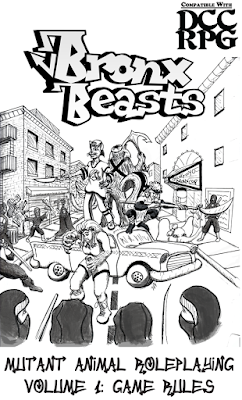 If you want your game to have a more heroic feel, there is a four color comic variant for character creation. Characters are either random or deliberate mutations. There are several sub tables for beasts created deliberately. The Beast Type table has a great set up. You can roll a d100 to randomly determine your animal nature or you can roll different dice depending on what biome you come from (urban, rural, wild, exotic, or bird-only). You then choose beast size (tiny to huge). This choice affects various stats. Next your roll to see how beastly your speech, legs, hands, and looks are. After this you get several "evolution points" that can be spent to customize your beast (for example give you armor or a natural attack). Like other DCC games, you roll your lucky sign (which gives you bonuses or penalties are certain die rolls based on  your Luck score). The final part of character creation involves using that info and filling in the rest of your character sheet. Overall the character creation process seems like a fun blend of DCC and TMNT and Other Strangeness.

The rest of the zine gives other variations to standard DCC. There are no classes and everyone's stats are determined by their beast's levels level. There are some cool new rules. The non-magical nature of the game reminds me of DCC Lankhmar. Characters get Fleeting Luck and can spend luck to heal. Armor doesn't actually increase armor class, but is rather a die that lets you soak damage. Finally there are beast checks, fur burn, and bestial freakouts that are reminiscent of the actions wizards can take, but in this case allow beasts to tap into their inherent animal sides.

If you're a fan of DCC and TMNT, you NEED to pick up this zine. It's only 5 bucks! You can grab your copy here. Look for a 0-level funnel adventure for the setting when this year's Gongfarmer's Almanac is released digitally.

Addendum: Because this doesn't use magic or the standard classes, I'm pretty sure you have almost everything you need to run this game just by picking this up and any version of the DCC Quick Start.
Posted by Justin Ryan Isaac at 1:49 PM