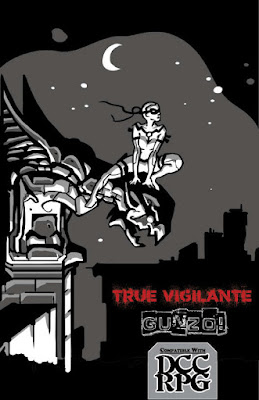 True Vigilante is the first of Bloat Games Gunzo! zines. While I've not seen a Gunzo! manifesto, the line appears to being taking DCC from it's normal gonzo fantasy settings and placing it in grittier alternate settings. The second zine relases is Operation: Bug Hunt, a military space setting. I'll be reviewing it later this week. So what's the premise of True Vigilante?

You're no hero.
You're a vigilante:
a crimefighter,
a dark avenger,
a gadgeteer,
a martial artist,
a protege,
a true vigilante.

You seek blood and justice, winning it with fists and violence, brutalizing the criminals, lowlifes and scum of the underworld, protecting the weak, breaking the vultures that prey upon them.

There is vengeance to be had and syndicates bled, and you will not stop until your justice has been served...

The book was created to make the original vision Eric had for SURVIVE THIS!! Vigilante City a reality. While Vigilante City is a great game (you know I feel that way), he says that he originally envisioned it as being something more like Kickass! or Batman: The Animated Series: with regular folks putting on a mask to do good. While you can place VC that way, the book is full of all kinds of supers characters.

A majority of the book focuses on the classes (which you can see above in the italicized text). They all have their own new thing, but many also have features from the DCC core book (like Mighty Deeds and Thief skills). I really like that Proteges get the halfling's Good Luck Charm ability. The classes all transition nicely into DCC rules. I'm impressed with what Eric (and Josh Palmer) did. This is followed by a starting cash random chart and pages of modern armor, weapons, items, and gadgets for your vigilantes.

The book ends with a 0-level funnel version of Ninja Beat'Em Up. This is a nice sandbox funnel. The section also has the 0-level occupation and random weapon table for character creation.

If you can't tell, I'm a big fan of this zine. I had never really thought about using DCC for anything comic related, but it really does work well for street level grittiness. This is just issue one and I can't wait to see what will be included in issue two.

I also have to take a moment and say that I'm totally honored that Eric dedicated this one to me. 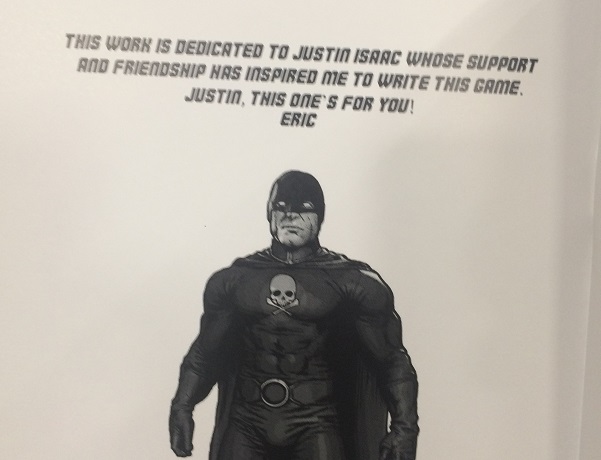 You can get a print copy of True Vigilante here and the pdf here.