I stopped at an antique store this week and found a Happy Meal toy that I used to have and love. It's a little plane from Hot Wheels Attack Pack. I used to love those, even though I never had the big ones and only had the Happy Meal versions. It is about the size of the recent Transformers minis I picked up from Dollar Tree and I decided it would be a cool mini for the game.

Plutonian Mimics are shapeshifting organisms native to the dwarf planet. They can survive intense pressure and don't require oxygen. While they start life small, they can grow to be as large as a stealth bomber or semi-truck and trailer. On Earth they often take the forms of vehicles to lure prey. While they don't pose a direct threat to many Techtrillions, their hunger for flesh and vehicular appearance can lead to paranoia and fear being spread among the human population about the robots in disguise. 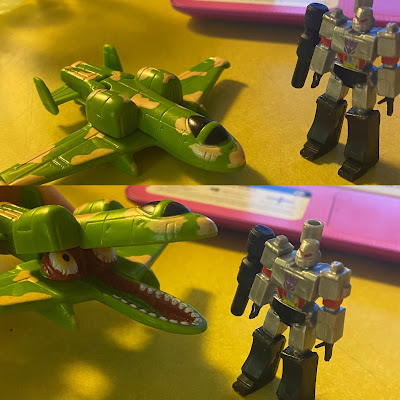 Posted by Justin Ryan Isaac at 3:17 AM