Today's character is doing his best to avoid death in The Blackest Space. 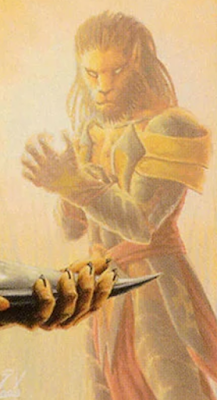 Attack Damage
Claws +1to hit, d4+1 damage
Telekinesis +3 to hit, 1 damage (60' range)
Laser Pistol +3 to hit, 1d6 (100' range, 20 shots per clip)
Energy Rifle +3 to hit, 1d8 (200' range, 15 shots per clip)
Knife +1 to hit, d4 damage (60' thrown)
Race Traits:
Race Traits:
Equipment
92 Galactic Repute, Sensor Comm, Laser Pistol (2 extra clips), Energy Rifle (1 extra clip), Simple Breather, Medi-Pak, Knife, Backpack, Quality Wine, Small Mirror
Background
Born with access to the Eye of Koshka, Griz was destined to become a Meta-Psyche or Emerald Champion. Well... that's what his parents thought, at least. However, while he appreciated his psionic and the advantages they gave him, he preferred a more roguish carefree life style. As soon as he could, he left home and joined a pirate crew. While he learned a lot and it was exciting, he found the life of a space pirate to be too violent for his tastes. He took to smuggling and has never looked back.
Posted by Justin Ryan Isaac at 4:00 PM