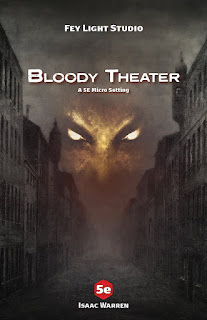 Bloody Theater is a 16 page full color 5e zine by Fey Light Studios.  The zine contains a district map, two encounter tables, and a list of establishments found within. The Animus Playhouse was created by a retired adventure. It is one of the four factions detailed in the zine. The second faction is antagonist to them. This is a group of vampires led by Thorne Astric, a 300 year old vampire with a score to settle with the owner of the Animus. Additionally you have the Shifting Hand Gang, a local gang of cutpurses, the City Watch, and the Brokenwing Clan. This final faction are a group of kobolds left over from a dragon's attempt to take over the city. They now mostly work as public servants. Each faction has a few members listed.
Additionally there are several stat blocks. Enforcers are tough criminals that use violence to get the message across. Fatbergs are animated oozes lurking in the sewers. They are disgusting bits of trash, fats, and random magics. Fledgling Vampires are somewhere between regular vamps and vampire spawn. Gregor is the second in command of the Shifting Hands. Necrothralls are humanoid servants of powerful undead, warped by necromancy. Night Hounds are feral dogs that serve urban vampires, just like wolves serve  other vampires. A new weapon, the kukri, is detailed, as is a cursed magical variant. Finally since there is a casino in the theater district, three gambling games are presented with rules.

This is a fun zine. It doesn't have a lot of art, but doesn't really need it. If you want to add some culture and intrigue to your urban adventures. This is a great supplement to do so. The district would plug into Waterdeep or Baldur's Gate easily. It could also be in any City in Exandria or on Eberron. You can get your copy here from Exalted Funeral. You can also support future Fey Light Studios zines by supporting them on Patreon.