Plot
Part One: 1994
Deena and her friends from the seemingly cursed community of Shadyside find themselves embroiled in and a witches curse and must fight to save one of their own.
Part Two: 1978
After seemingly saving her girlfriend, Sam, Deena and her brother Josh seek out the survivor of the 1978 slayings, Ziggy. Ziggy recounts then tells them of the Camp Nightwing Massacre.
Part Three: 1666
The final film in the trilogy tells the true story of the witch Sarah Fier and how Shadyside came to be cursed.
Review
I honestly wasn't sure what to think about this one going in. The only thing I knew about the Fear Street books is that they were RL Stine's teen horror novels in the vein of Goosebumps (which I devoured as a child). That being said, I really loved the trilogy and because invested in the story of the Shadysiders. Deena is a really cool strong protagonist. I also really liked her little brother Josh. He was the geeky support character that all groups need. The trilogy does a great job of weaving lore and building the story, even if it's not told in chronological order. I really got invested in the characters and was really sad when some of them were killed, despite know that's how slasher movies work. Of the three films I think Part Two was the best. It was the most self contained story and was a great slasher set in the 70's. I also appreciate that it wasn't afraid to kill kids. Many horror movies won't do that. I like the all of the major characters' actors from Parts One and Two were brought in to play their ancestors in Part III. These movies did a great job of storytelling and world building.
They weren't perfect though. In particular, Part One constantly played music from the 90's in the beginning. While I liked all the tunes, it was literally one song after another. I think using the music more strategically would have been more impactful... or at least would have stopped me from rolling my eyes.
In Your Game 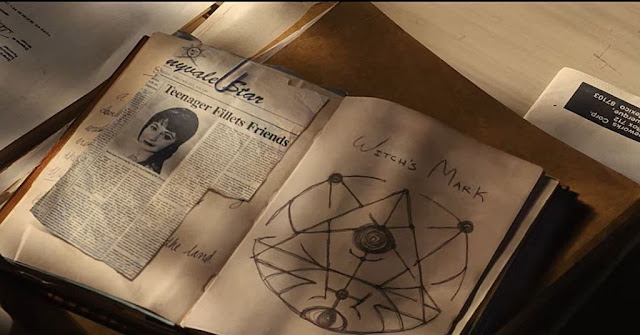 The Widow's Tome
This satanic book is full of Dark spells. At the gamemaster's discretion any spell with the Dark descriptor can be found within its pages. There are also rituals within its pages that can be performed by non-witches. The most notable of which trades the lives and souls of unfortunates for wealth and luck.
Movie Count
New To Me: 14
Total Movies: 20