War Nurse and the Girl Commandos Airdrop Into Battle

Decided to flesh out the New Punverse and stat out some heroes and villains from days gone by. 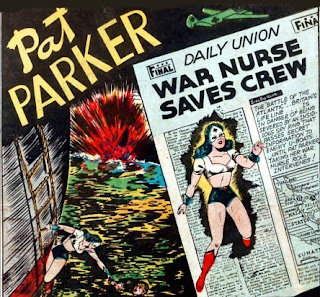 Medium Humanoid, Lawful Good
Armor Class: 14 (Dexterity)
Hit Points: 75
Speed: 30 ft.
Challenge: 2 (450 XP)
Str 12 (+1) Dex 18 (+4) Con 13 (+1) Int 16 (+3) Wis 18 (+4) Cha 16 (+3)
Saving Throws: Dex +7, Wis +7
Skills: Athletics +4,  Insight +7, Investigation +6, Medicine +7, Perception +7, Stealth +7
Proficiencies: Vehicles (Land)
Senses: passive Perception 17
Languages: English, French, German
Unique Traits
Field Medicine: Using a medicine kit (standard kits have 10 uses), War Nurse is capable of aiding allies, even in the midst of combat. As an action War Nurse may stabilize an ally within 5 ft without making a Medicine Check. She can also use an action (and use of her kit), to heal a conscious injured humanoid 9 (2d4+4) hit points. The humanoid can't benefit from this ability again until after a long rest.
No One Gets Left Behind: The first time an ally within 30 ft fails a Death saving throw, they may reroll it. This ability can't be used again until War Nurse takes a short rest.
Rally: When within 5 ft. of a target that is afraid or stunned, War Nurse can use her action to remove the condition. The same effect grants Advantage on fear and charm saves for all those who can hear and understand her until the end of her next turn.
Actions
Mutliattack: War Nurse gets two attacks.
Combat Knife: Melee or Ranged Weapon Attack. +4  or +7 to hit, reach 5 ft. or range 20/60 ft, one target. Hit: 3 (1d4+1) or 6 (1d4+4) piercing damage.
Pistol: Ranged Weapon Attack. +7 to hit, range 50/150 ft., one target, Hit: 11 (2d6+4) piercing damage. (15 round clip)
Background
Pat Parker was a young British nurse from Doville, England, a small village near London. She used her medical knowledge to help the wounded when her village was attacked in an air raid. She then enlisted and before long found herself serving with the Royal Air Force. She created a costumed persona and led a double life as nurse and vigilante. She eventually formed the "Girl Commandos" and became a field agent for the Special Operations Executive. She and her team also served alongside Captain Battle and Freedom Squadron. After the war, Pat settled down and married her long time love interest, pilot Don Frasier. The pair would eventually move to the US, when Don became a test pilot for Carol Aerospace. She had several children and grandchildren (which includes Pete Sparling) and lived a long and happy life. She died peacefully in her sleep.