The Acrobatic Flea Bounds Into The New Punverse

My friend, the amazing David Copoletti, did an original piece for this post. 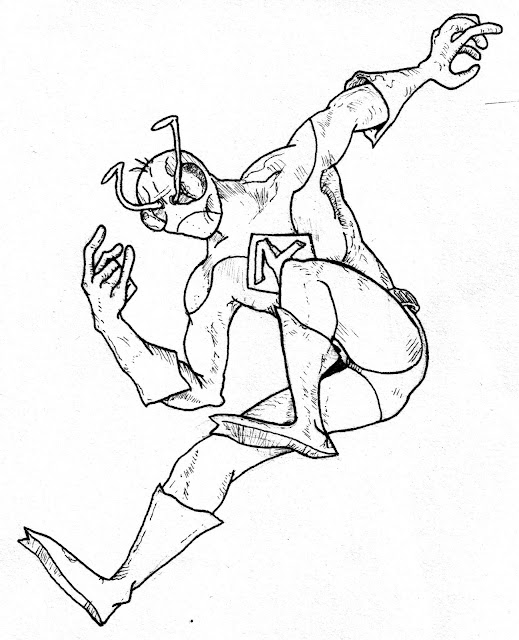 Code Name: Acrobatic Flea
Real Name: Sean Knight
Team Affiliation: Guardians of Terra (Reserve)
Medium Humanoid, Neutral Good
Armor Class: 14
Hit Points: 125
Speed: 40 ft., climb 30 ft.
Challenge: 5 (1,800 XP)
Str 14 (+2) Dex 18 (+4) Con 14 (+2) Int 16 (+3) Wis 16 (+3) Cha 14 (+2)
Saving Throws: Dex +7, Cha +5
Skills: Acrobatics +7, History +6, Insight +6, Persuasion +5, Sleight of Hand +7, Stealth +7
Senses: darkvision 60 ft., passive Perception 13
Languages: English
Unique Traits
Deft Striker: Acrobatic Flea uses Dexterity for Unarmed Attacks, rather than Strength
Evasion: Acrobatic Flea can dodge out of the way of area of effect spells and attacks. When subjected to one that allows him to make a Dexterity saving throw to take only half damage, he takes no damage  instead if he succeeds and only half if he fails.
Nimble:  Acrobatic Flea can take the Disengage action as a bonus action on each of his turns.
Second Wind: On his turn, as a bonus action, Acrobatic Flea can draw on his stamina reserves to heal 1d10+12 hit points. He can't use this ability again until he takes a short or long rest.
Actions
Mutliattack: Acrobatic Flea makes two Flea Bite attacks.
Bolas: Ranged Weapon Attack +7 to hit, range 20/60 ft., (one target), Hit: 6 (1d4+4) bludgeoning and Large or smaller creatures hit are grappled. A creature can use it's action to make a DC 10 Strength check, freeing itself or another creature within its reach on a success. Dealing 5 slashing damage to the bola (AC 10) also frees the creature without harming it, ending the effect and destroying the bola.
Flea Bite: Melee Weapon Attack +7 to hit, reach 5 ft., (one target), Hit: 7 (1d6+4) bludgeoning + 2 (1d4) lightning damage.
Background
Sean Knight's vigilante career began in the 80's. The young reporter formed a bond with scientist, Tim Ritter. Seeing a kindred spirit and inspired by a mutual love of superheroic tales, Ritter designed an armored costume with shock gloves for Sean. Calling back to his childhood nickname, Knight dubbed himself the Acrobatic Flea. A UK native, AF relocated to London and soon became one of the most popular British vigilantes, serving as an unofficial spokesperson for the nation's superhero community. He also became a reserve member of the Guardians of Terra, developing a close friendship with Miss Direction. While he's slowed down his heroic activities as he's gotten older, AF can still go toe-to-toe when the need arises. Recently AF has started to mentor the American superhero, Web-Archivist. The pair me while the latter was at a library conference in the UK in his civilian guise. Teaming up to take down the Australian necromancer, the Down Undertaker, they stopped the Aussie from stealing rare occult tomes displayed at the conference. This showing has also led to the government contacting AF about training the next generation of UK superheroes. While he isn't super thrilled about the idea of working that closely with the government, he can't deny there is a thrill and send of pride that comes from having such a positive impact.
Posted by Pun Isaac at 8:40 AM