One of my favorite holiday traditions is watching the horror/comedy Santa's Slay. The basic premise is that Santa is actually the son of Satan and they only reason he's ever done good is that he lost a curling match with an angel. Well the deal is up and Santa is ready for revenge. This movie doesn't take itself seriously at all and in my opinion is great for what it is. There are so many hilarious lines in this movie. If you ever get a chance to watch it, you should. For next week's Mastermind Monday I will post stats for Santa's hell-deer and sleigh. 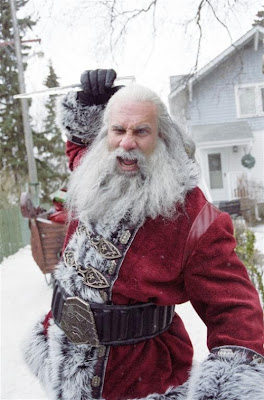 Complications
Revenge - Santa wants revenge against the Yuleson family for his forced servitude.
Theme - Santa can't help but make all of his killing spree and crimes Christmas (or at least holiday related)