This week, Tim Brannan over at The Other Side has been posting about Castles and Crusades. You can check out his C&C posts here. As usual, Tim got me excited about a game so I decided to make a couple of purchases this week. 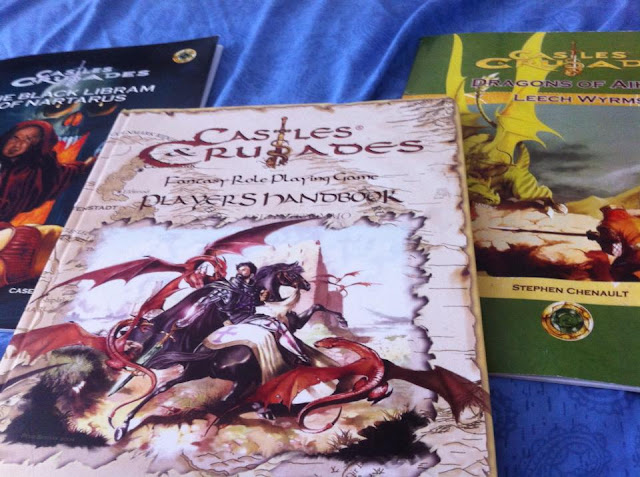 Castles and Crusades Player's Handbook - I'm not going to review the book. Tim already did an excellent job of that. This review was honestly the reason I decided to pick up the books. The clarification about the game only having one edition was what settled it for me.You can pick up copies of earlier printings on Amazon rather cheap. I grabbed a copy of the 2nd printing for 13 bucks (and free shipping through Amazon Prime).

Dragons of Aihrde: Leech Wyrms - I've actually had this book for about a year now. I picked it up for a few dollars at a used book store in Nashville. The book contains 8 new lesser dragons (with an mini adventure for each), a new human subrace (with a racial dragon rider class), a slightly longer adventure (three pages), and two new magic items.  While the book is nominally set in the Airhde setting, these wyrms can be used in any game. I really like that the adventure seeds are lower level. My only complaint is that the racial class doesn't contain an experience table. This is the only racial class I've seen (and I"m extremely new to the game), but that seems like something that's needed. Then again maybe not if the class is only for npcs.

Black Libram of Nartarus - I've read that the Black Libram of Nartarus is the closest thing C&C has to a Book of Vile Darkness. That's why I had to pick it up. The major addition this book brings to the game is necromancy. Any spellcaster can learn necromancy, they just have to declare that they want to learn it at the beginning of a level. This access to new spells comes at a greater experience point cost to level up and eventually negative charisma modifiers. The spells (which have wonderful swords and sorcery names) gained are truly gruesome though. For example, one of the spells magically disembowels its victim, leaving them with only 4 HP. They can only recover with the aid of powerful magic. Two eldritch tomes are also mentioned. One is dark fey-centric and the other dragon-centric. Any caster in possession of the tomes can use the spells. The book also contains rules for sacrificial magic and includes dark magic items. Finally it gives us more than 20 new undead monsters (including classics like the demilich and new creatures like the frightening Red Jester). That chapter also contains rules for more powerful vampires, liches, and mummies.

This book was well worth the ten dollars I payed for it. The book is nominally setting specific (mentioning gods from the Haunted Highland setting). This isn't a problem though because Troll Lord has released a free pdf detailing those gods. 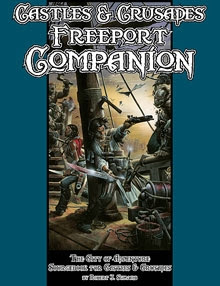 Castles and Crusades Freeport Companion - I have mentioned a few times in the past that I love the Freeport setting. Recently Green Ronin had a Kickstarter to fund a new version of The Pirates Guide to Freeport for Pathfinder. I pledged a hundred dollars (like I said, I LOVE Freeport) and will receive some cool swag for it. One of the things I got was Freeport Companions for other systems in PDF form. This past week I got codes for the existing Pathfinder, 3rd Era, Savage Worlds, True20, and Castles and Crusades companions. Strangely enough while they all have some common ground, each mentioned different npics and monsters.

The book is full of new C&C stats and rules. Here's what's in the book:


Obviously this book is Freeport (and therefore pirate) oriented, however it's still quite useful even if you're not calling the City of Adventure your home.

My next (must-have) purchase is Monsters and Treasure. I hope to pick it up this coming week.
Posted by Justin Ryan Isaac at 10:44 PM