Light City #2 - The Elemental and Spectrum 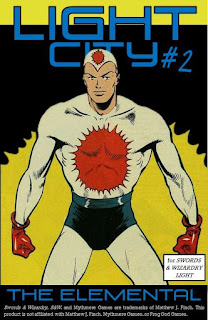 Light City#2 - The Elemental is a great continuation of +Jonathan Linneman's Swords & Wizardry Light to supers game project. The elemental is a great choice for making something like the Human Torch but even works for something like Green Lantern. He gets a nice selection of abilities and a nice version of flight that doesn't unbalance the game. Definitely check this one out. Like The Brawler, it includes an example super using this class. I converted El Hijo de Lobo Plata for the brawler. For the elemental I decided to convert my DC Lantern Corps character, Spectrum. 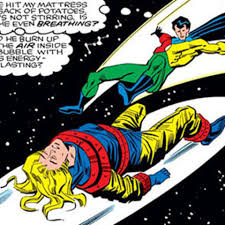 Spectrum is a man created by the rogue guardian Krona. He is the living embodiment of the emotional spectrum. An emotional young man, he strives to use his abilities for good. He is an ally of Hal Jordan and Kyle Rayner (two of the only individuals to know Darryl's true origins.)

Quirks: Spectrum's aura becomes visible when using his abilities. The color of this aura and his eyes match the emotion he's tapping into.

Also, Spectrum has a Charisma of 15 or higher. In Swords & Wizardry Light that means he would have a torch boy. I think for Light City that should translate to a sidekick/super pet.
Posted by Justin Ryan Isaac at 1:55 AM