I re-watched Blacula this morning and I think Mamuwalde would make a great guest villain for Light City. While he is a monster, he shows remorse and love. He is a true vampire noble. If you want to learn more about Prince Mamuwalde, watch Blacula. Scream Blacula Scream was entertaining, but if you really want to learn about the character watch the first film. 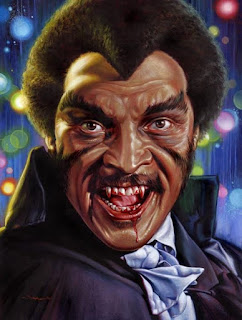 As a vampire, the prince has many special abilities and advantages. He can turn into a bat and has incredible strength. He is immune to damage from mundane weapons. He might be knocked back by a solid hit with a shovel or something of that nature (but it doesn't actually do damage). However, fire affects him just like it would any other man. He also takes 10 points of damage a round when in direct contact with the sun. Holy water can harm him and if presented by someone with conviction (though not necessarily religious conviction), he can be held at bay with a cross. He can be killed if a wooden stake is driven into his heart while in his coffin or by direct sunlight.

What do you think about this format? My next Light City project is a villain and henchman guide.