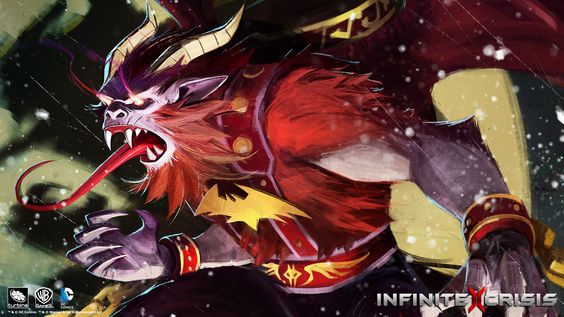 Losing his humanity and succumbing to vampirism while fighting Dracula, Nightmare Batman is one of the deadliest assassins in the multiverse. Initially he was able to hold his hunger in check, after slaying and gorging on the Joker, he has become an unpredictable but deadly fighter.

During one of this hunts through the multiverse he was bombarded with ancient magics and infused with the essence of the ancient entity, Krampus.

A deadly opponent before his transformation into an unholy abomination, this batman is truly a nightmare. He is immune to damage from mundane weapons. He regenerates 5 HP every round.  He also takes 10 points of damage a round when in direct contact with the sun. Holy water can harm him and if presented by someone with conviction (though not necessarily religious conviction), he can be held at bay with a cross. He can be killed if a wooden stake is driven into his heart while in his coffin or by direct sunlight.  Anyone killed by Batman's bite and not decapitated will rise as a vampire. Being undead, he can be resurrected via certain black magics.

From Krampus, Batman has been given the terrifying ability to sense and know sin. He is also immune to all cold.