Though I really want to, I haven't been able to watch Black Lightning yet. If you have, what do you think? He's been another character I've liked for a while. He's a teacher and was the head of the Department of Education under President Luthor. He's was a founder of the Outsiders, a group I really enjoyed reading. 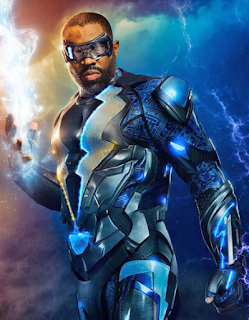 
Note that while they're both African-American characters connected to DC with electric powers, he's not related to or connected to Static. He actually addresses the misconception the Static is his son in an issue of Justice League. I do think it has been retconned that Virgil was inspired by him though.