Static Shock was one of my favourite cartoons as a teen. It was well written, had great diversity, and later had direct tie-ins with the DCU. I've read the DC Static stuff, but I'd love to get a hold of the original Milestone stories (along with the other Milestone comics).

Below you'll find the fresh after the "Big Bang" rookie version of Static. He's destined for great things though. As Justice League Unlimited shows he eventually joins the Batman Beyond era Justice League. 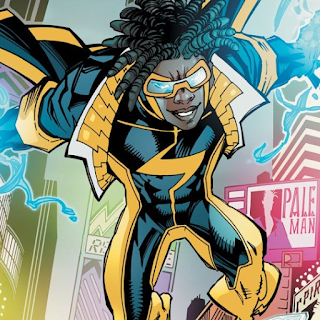 Virgil was just a normal geeky high school student until day he found himself caught in the middle of a gang showdown. The police tried to tag the members by using tear gas, unfortunately the gas had been spiked with Quantum Juice. Q-Juice as it's nicknamed is a mutagen that can activate the latent meta-gene inherent to humans. Virgil and many others gained powers that day. Virgil gained electromagnetic powers. Being a comic book geek, he created a costume and became the hero, Static!