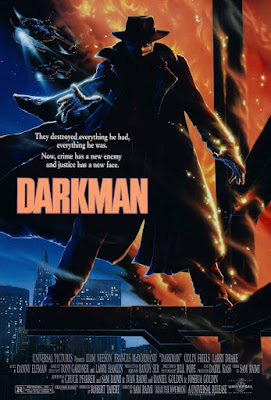 I think Sam Raimi's Darkman is a forgotten superhero gem. I also think the low level nature of it lends itself well to the OSR nature of Light City.

Sythnetic Skin (Consumable) - This artificial skin allows its wearer to look however they want for 99 minutes after exposure to light..

Dr. Peyton Westlake was a scientist developing synthetic skin for acid-burn victims. The synthetic skin can mimic
anything, but becomes unstable 99 minutes after exposure to light. When his attorney girlfriend angers a mob boss, he is beaten, burned with acid, and caught in an explosion. He survives and is hideously burned. He is given a radical treatment that serves the nerves of the spinothalamic tract, which means that he no longer feels pain. In addition, he loses tactile sensation. This gives him enhanced strength due to the adrenal overload it puts on his system. It also mentally destabilizes him.  He begins studying his enemies so that he can mimic and destabilize their organization. He gets his revenge,  but this turns him to the vicious and unstable vigilante, Darkman.
Posted by Justin Ryan Isaac at 8:56 PM