The proper title should probably be The Social Justice Mystic.

Okay so today's stats aren't really about a monster, but they are companion stats to Tim Brannan's Monstrous Monday post for today. He explains the background behind this and she has been accused of being a witch on several occasions. Also, this isn't the first time Devil's Due Comics has created political fantasy comics. Does anyone remember Barack the Barbarian? 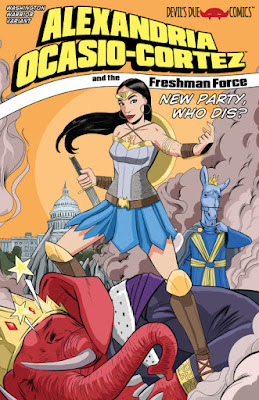 Step Into the Void to add level to spell's damage or add level X10' to range of spell.
May add INT modifier (+3) to any save roll or attribute check a target attempts against her spells
+2 on ranged Magic attacks
-2 on non Magic attacks

Spells
The number in parenthesis is the number of spells of that level that can be cast before Alexandria must Step into The Void.
Level 1 (10) - Bravery Aura, Comprehend Languages, Protective Aura, Purify
Level 2 (5) - Detect Secret Spaces & Traps, Heal II, Tap Into the Tomes, True Sight