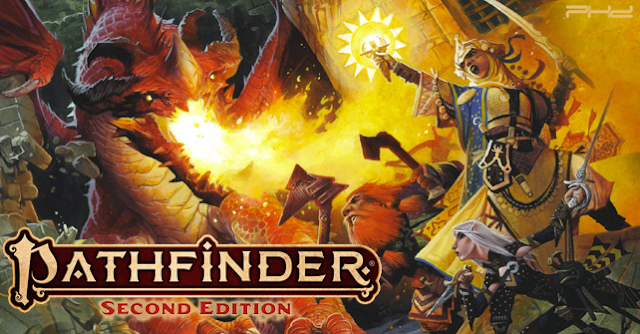 Unless you've been living under a rock, you've probably heard that Pathfinder 2nd Edition has been released. While I used to have many books for the system, I'm not a Pathfinder player anymore. I used to have a blast with 3.0/3.5 I found my tastes in games changed. I'm not the biggest fan of skill points, giant attack bonuses, and a lot of actions/attacks per turn. It just seems complicated to me. I tend to like simpler rules. I think one of my other hangups with Pathfinder is the same hangup I had with 3.0/3.5. There are so many source books. Players get these sourcebooks and want to use the content (which is understandable), but it's a lot to keep track of.

All of that aside, I'd be lying if I said I wasn't interested in Pathfinder 2E. There seems to have been some interesting changes. Some of thing things I dislike are still there, but others are gone. I want to check it out. I'm not going to drop 60 bucks to do so though. I'm going to grab the core pdf (which is only 14.99) and dig into that.

Expect a review sometime in the future. Until then, check out these two reviews by Runehammer. Note the first one ends on a pretty harsh note, but he reverses his stance quite a bit in the second.